Power and Prestige in San Diego 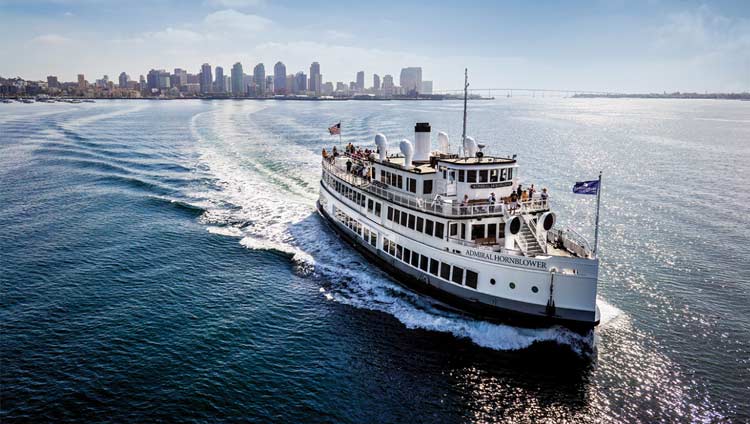 Don't let its regal appearance fool you — Admiral Hornblower is a workhorse. "San Diego is a pretty busy port, and we are usually sailing 365 days a year," said Nicholas Maxwell, port captain for Hornblower Cruises and Events.

The vessel gives daily tours of the harbor and evening dinner cruises, as well as private charters. Admiral Hornblower even serves as a backup whale-watching tour vessel.

Designed by Nickum and Spaulding Associates of Seattle, Washington, the vessel has sailed along the California coast for many years. One of the first built by Hornblower, the vessel launched in 1984 as the M/V City of San Francisco before it later moved to San Diego and was renamed Lord Hornblower. After years of service, the vessel was remodeled and rechristened Admiral Hornblower in 2014.

The past four years, Admiral Hornblower had everything needed to properly entertain guests with its three spacious salons, three full-service bars, two dance floors, and seating for up to 500 guests. Yet, deep down, something was missing. Alongside the John Deere-powered generators in the engine room were two old propulsion engines in dire need of replacing. The old engines were not John Deere and would need to be dismantled for removal to avoid disturbing the newly renovated interior.

"Ease of installation was a big consideration when looking for a power plant," said Maxwell.

With a new set of 429-kW (575-hp) PowerTech™ 6135SFM85 engines, Admiral Hornblower runs better than ever. The repower added 75 kW (100 hp) of propulsion power and torque performance also improved. "It's nice to have more power and torque to get the vessel up to speed and for maneuvering," he says.

Plus, the full-displacement vessel weighing 500 tons is more fuel efficient. Cruising 12.5 knots at 1650 rpm, each engine consumes about 12 gallons per hour. "We have the same fuel rate as before, but we also have more power," Maxwell says. "I look at that as better fuel economy."

Plus, the engine room is quieter since the repower — a bonus for the crew as well as the passengers seeking a tranquil coastline cruise.

Ease of installation was a big consideration when looking for a power plant.