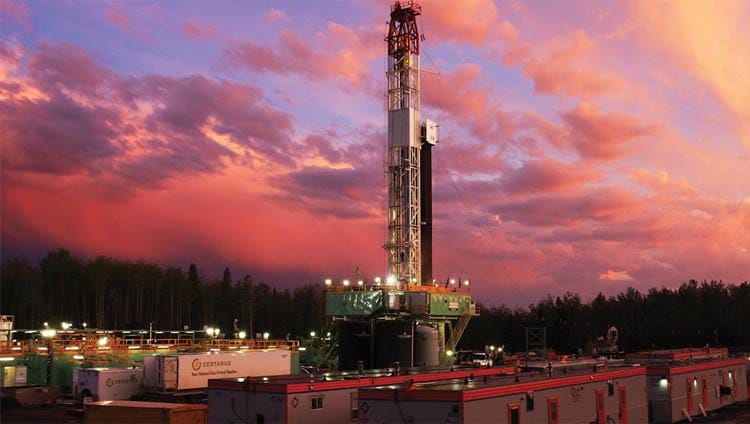 When the winter drilling season begins in Fox Creek, Alberta, Precision Drilling Rig 574 will be working around-the-clock, drilling for gas in the Montney Shale Basin. Sometimes it can get so cold, water vapor created by a nearby boiler will rise and morph into a mist of tiny ice crystals.

For the oil company representatives working at the drill site, the only reprieve from the winter conditions is five heated well-site buildings that serve as not only their home away from home but also as their offices. The shacks, as they're called, hold promise of a hot shower and a warm place to sleep. There's a shack for the rig manager, geologist, directional drillers, and fluids technician, and one shack serves as a main command center.

Rig 574 is owned and operated by Precision Drilling Corporation. The company is a leading oil and gas drilling rig contractor in Canada and has rigs active in major resource plays in the United States and Middle East.

The rig is one of five working in the Fox Creek region and among 47 throughout the Western Canada Sedimentary Basin. The drilling camps are located far off the grid, and electricity is supplied by diesel-powered generators. Most camps have two of them: one that powers the camp and one that’s on standby.

Built on an oil-field skid, the generator sets are equipped with block heaters and placed inside a small building about the size of a shipping container. As the drilling operations move to a new location, the containers are winched on a tractor-trailer and transported with the rig.

Some John Deere–powered generators are dedicated cold-start engines that power the rig after changing locations. "After the crew moves the rig to a new location, we use the cold-start engine to power the lights and boiler, as well as the air compressors for the air starters on the large engines on the rig," explains Vic Archer, Precision Drilling's senior manager for power systems, located in Nisku, Alberta.

Precision Drilling isn't new to John Deere engines, says Archer. "We’ve used them in camp applications since 1999." He adds that John Deere engines are price competitive, fuel efficient, and have proven to be reliable and long-lasting over the years.

"When you consider the price, longevity, and service, John Deere engines have been a well-made choice," says Archer. "They fill our niche perfectly."

When you consider the price, longevity, and service, the John Deere engines have been a well-made choice.