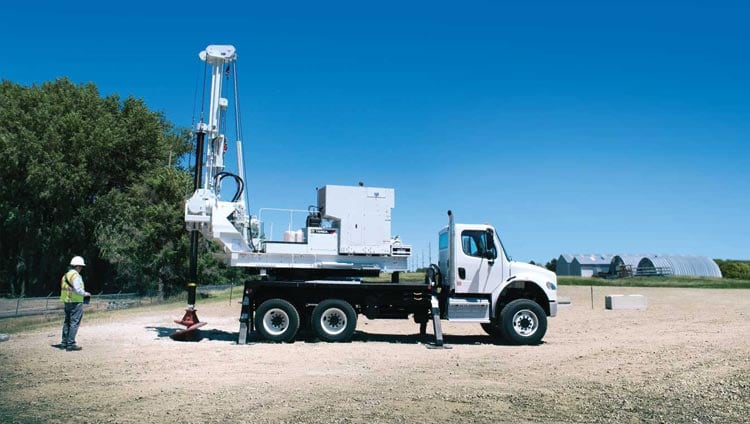 Don't have a seasoned auger drill operator on your crew? Terex Utilities of Watertown, South Dakota has your back.

The company completely redesigned its truck-mounted A330 and A650 auger drills for those who may not have years of experience. Operators must still be trained and familiar with the machine; but they will quickly be more productive, because the innovative controls aid learning — a big win for rental companies.

A tour around the Terex auger reveals a host of new features, including an enhanced control system, radio remote controls, and a new hydrostatic transmission driven by a John Deere PowerTech™ Final Tier 4 engine.

Terex is also among the first to standardize truck-mounted auger drills with radio remote controls, says Jeremy Weber, engineering manager for auger drills at Terex Utilities. "Operators don't have to get on and off the machine. It also reduces operator fatigue because riding the machine all day can be taxing," says Weber. "Remote controls enable the operator to stand in a more convenient location where he or she can see what's going on, away from machine noise and vibration. All of this helps the operator run the auger more efficiently."

The new auger drill control system allows the truck, unit controller, and John Deere engine to "talk" with each other. The control system is designed for the radio remotes to be the primary controls, but customers can also order the auger drills with a command post with joystick controls.

Adding to the augers' simplicity is a new hydrostatic drive transmission, which replaces the mechanical transmission that required significant skill to operate, says Weber. "If the operator wasn't familiar with the machine's controls and incorrectly pressed or released a lever, it could damage the machine. We've now introduced a hydrostatic system that most users will learn more easily to operate."

All hydraulic functions are driven by a John Deere engine. Terex powers both the A330 and A650 with the PowerTech PSS 4.5L — an engine that meets the latest emissions requirements without a diesel particulate filter (DPF).

Northstar Power assembles a complete power unit with a custom-fabricated enclosure. "When we went to Final Tier 4, no other engine manufacturer could package it in an enclosure the way we needed," says Weber. "Northstar Power was the only one that could accommodate our needs."

Terex's relationship with Northstar Power spans decades, and John Deere engines have powered a variety of Terex machines. "The John Deere engine block isn't new," says Weber. "It's been proven in the field and is as bulletproof as any engine you can find."

Weber says the Final Tier 4 engines offer emissions compliance with no sacrifice in power and torque. "Our drills have always been defined by their torque performance. As emission standards keep increasing, we are able to maintain the horsepower and torque that has always been in this product."

Northstar Power was the only [engine distributor] that could accommodate our needs.