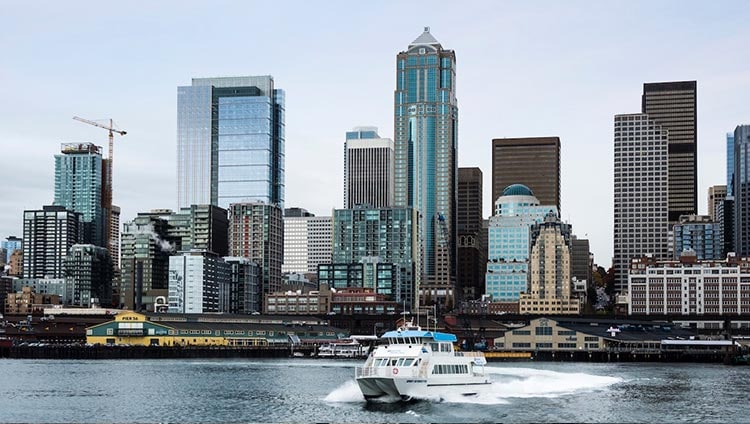 With more than 100 tech companies setting up engineering centers in the Seattle area in recent years, the population of this seaport city is surging to unprecedented levels.

Such dramatic growth fuels the need for more transportation options for commuters. In a city where traffic congestion is making commutes longer and longer, community leaders, private companies, and residents are looking to the less congested waterways and realizing that ferries are a fast, reliable, and relaxing way to reach their destinations.

In fact, ridership is soaring. More than 600,000 people use a water taxi service annually, and that number is only expected to increase.

To accommodate anticipated growth, Seattle has been updating docking facilities and its passenger ferries, including those owned and operated by King County Water Taxi.

Among the updates is the 149-passenger-only vessel, Spirit of Kingston, the marine division's backup water taxi, which recently underwent a refit and repower with four new John Deere PowerTech™ 6135SFM85 marine propulsion engines that meet the latest EPA Tier 3 requirements.

"The John Deere engines are much more environmentally friendly," writes Paul Brodeur, marine division director. "We anticipate exhaust emissions will be reduced by 22 percent and particulates by 45 percent with this improvement. Also, fuel consumption is projected to decrease by 7 percent."

These environmental benefits tie into King County's strategic climate action plan to achieve a sustainable and thriving region. The upgrade was partially funded with a federal grant. In addition to meeting emissions, the new engines prepare the vessel for years of reliable water taxi service.

Vessel reliability is the cornerstone of King County's service. King County Water Taxi maintains an excellent track record, with 99 percent reliability and 99 percent of the sailings departing on time (within 5 minutes of schedule). When one of the main ferries is out of service, the Spirit of Kingston is rotated into service on the 10-minute route between downtown Seattle and West Seattle.

The 14-year-old Spirit of Kingston now cruises 3 knots faster — which is an asset in this bustling city. "The Spirit of Kingston can operate at speeds up to 39 knots now," says Ron Panzero, King County's Marine Operations and Maintenance Manager. "That's pretty fast for a 70-foot (23-meter) ferry."

We anticipate exhaust emissions will be reduced by 22 percent and particulates by 45 percent with this improvement.