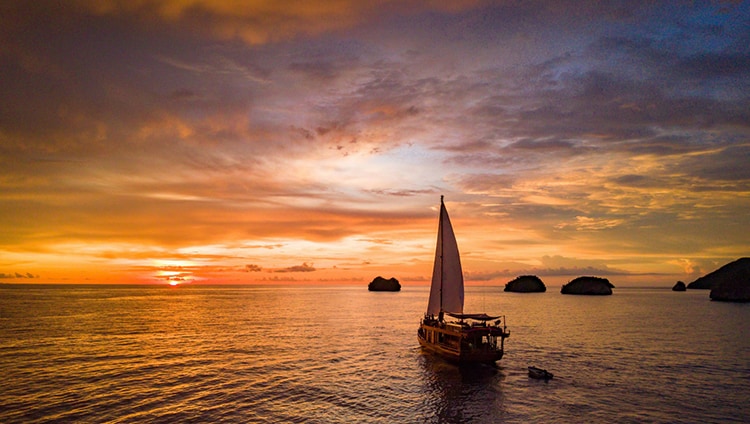 Imagine yourself aboard a privately chartered luxury yacht exploring one of earth's most biodiverse, coral-rich waters near Indonesia. The Coral Triangle is your playground, and the Sequoia is the vessel for exploring this vast tropical archipelago of over 17,000 islands above and below the water surface.

Owners Kevin Corcoran and Yessi Maya Sari would like you to make this dream vacation your own. In 2017, the two entrepreneurs launched Coral Triangle Safaris in eastern Indonesia.

The 26-meter (86-foot) wooden Sequoia is the centerpiece of their business venture. Designed as a "floating villa," Sequoia is handcrafted with teakwood floors, walls, and ceilings that give the vessel a rich warmth. The hull and superstructure are built with durable hardwoods such as ironwood. Some 10,000 corrosion-resistant copper bolts fasten it all together.

"Not only is it a beautiful boat, but it's also very strong," explains Corcoran.

Corcoran and Sari wanted Sequoia to resemble the traditional Lambo-style vessels that have long sailed the Southeast Asian seas. Their search led them to Indonesian Bugis boat builders — a group of indigenous master craftsmen whose traditional boatbuilding skills have been passed down through generations.

Sourcing raw tropical woods from local forests, the Bugis boat builders built the vessel from stem to stern, sawing, planing, and chiseling the timber by hand. "We had 12 carpenters, eight hours a day for four years building the vessel," says Corcoran. "All done using hand tools — a very labor-intensive undertaking."

The owners wanted to preserve the extraordinary aesthetic tradition of the Indonesian vessel while modernizing a few key aspects to create a liveaboard charter yacht experience. One of these modifications included powering the vessel with a reliable diesel engine for improved performance and safety.

"There's one thing that we're laser-focused on — safety, safety, safety," says Corcoran. "Our goal is that families around the world can explore the Coral Triangle knowing they will be safe and secure."

Once Sequoia's hull was built, the pair began the process of selecting an engine, marine gear, navigation equipment, and other mechanical systems. After a year researching engines, the couple selected a John Deere PowerTech™ 6090AFM85 engine.

After a season on the water, Corcoran says he's impressed with the engine's performance. "We wanted a continuous-duty engine with low-end torque that is very fuel efficient. Our John Deere 6090 achieves maximum torque at only 1700 rpm. This is extremely important cruising the Pacific where currents can be very powerful," says Corcoran.

"There's such great technology coming out of John Deere . . . I'm really glad we picked this engine," says Corcoran. "When you're in the middle of the blue waters of the Pacific, we rest assured knowing that we have reliable, efficient power to get our guests to the next destination."

We rest assured knowing that we have reliable, efficient power to get our guests to the next destination.