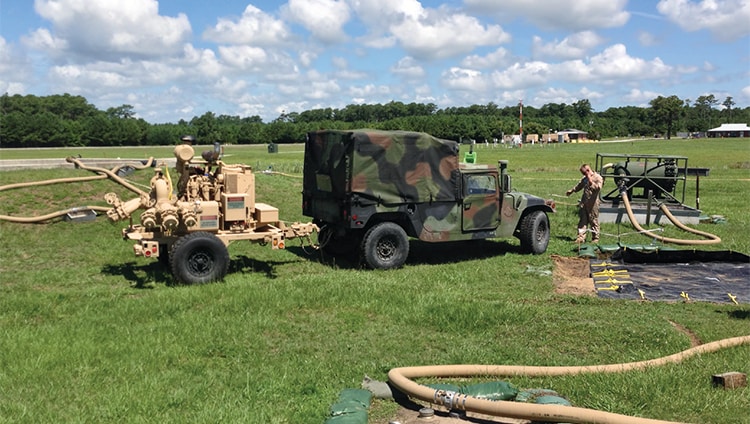 When military troops are in need of fuel or water, they need it to flow fast. Pumping equipment must be reliable, rugged, and ready to work in sandstorms, extreme cold and heat — and in the heat of combat.

Paul Darley understands. The president and CEO of W.S. Darley & Co. makes it his mission to ensure the company's mobile pumping units meet — and exceed — stringent specifications of the military.

Mounted on a 2-wheel chassis, the centrifugal pumps are built to rapidly transfer jet fuel or water from collapsible portable bladders. Among the requirements specified by the USMC, the units had to deliver a minimum 600 gallons per minute (2,271 liters per minute) of fuel or water at 150 pounds per square inch (10.3 bar).

For Darley, that specification was just a starting point. "Our pumping units deliver 1,000 gallons (3,785 liters) per minute at 150 psi (10.3 bar), exceeding the military's requirements by as much as 67 percent," states Darley. "Due to higher flows, U.S. Marines will be in harm's way far less time as they complete their required critical tasks."

Darley purchases the PowerTech Plus 4.5L engines as a complete power unit from Superior Diesel. John Deere engines are Tier 3 compliant and are also specially equipped with hardened parts that make the engines jet-fuel-compatible, which is an attractive combination, according to Shane Sullivan, Darley design engineer.

Yet one of the most appealing characteristics of the PowerTech Plus 4.5L engine is its power density. The military specifications required that the trailer-mounted pumping unit weigh no more than 4,200 pounds (1.9 metric tons) for towing behind a military Humvee. The engine, rated at 111 kW (149 hp), weighs just 517 kilograms (1,140 pounds). "The horsepower-to-weight ratio was a differentiating factor in our selection of the John Deere engine," says Rob Bond, program manager for the LE600.

Other factors also contributed to the selection of the John Deere engine. Bond says John Deere came out with improvements that "militarized" the engines, including a special fuel filter that adds lubricity to the jet fuel to enhance engine longevity, and a heater for cold starting."

The service from their John Deere engine distributor also played a critical role in the project's success. "Superior Diesel supported us through the trials of a demanding customer and the turbulence of brutal testing at Aberdeen," says Bond.

The Aberdeen Proving Ground is known worldwide as the toughest of all testing facilities, with the mission to provide test and test support services primarily for Department of Defense customers. The John Deere-powered LE600 sailed through rigorous testing, which included passing 96 requirements. The units had to operate at 160 degrees Fahrenheit (71 Celsius) for four hours and operate -30 degrees Fahrenheit (-34 Celsius) for 12 hours; and were also subjected to blowing wind, rain, sand, and high altitude.

Building equipment for harsh conditions is nothing new for Darley and his 235 employees. For over a century, this family-owned and operated company has been supplying fire and emergency crews around the world with fire trucks and fire pumps. Similar pumping units to the LE600 are in operation at thousands of fire stations and military bases around the globe.

The company's headquarters are located in Itasca, Illinois, with manufacturing, engineering, and research and development operations in Chippewa Falls, Wisconsin and Janesville, Iowa. Final assembly of the pump systems will take place at the company's Ohler Pump Division. The pump systems are in full-scale production and are being delivered to the USMC now.

"Our competitive advantage is that we are a family business," says Darley, "but we're large enough to offer sophisticated products like the John Deere-powered LE600 pumping unit, as well as other innovations."