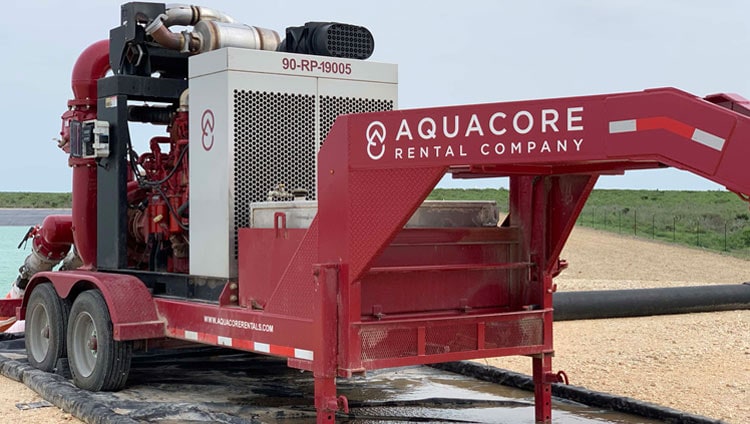 Pumping units for all environments

"We have customers who are drilling during the winter in North Dakota in the high altitudes of the Rocky Mountains, and in the heat of south Texas," says Ortowski. "Our priority is supplying pumping units that we feel is the best, and that's not going to give our customers any quality issues. Since we started using John Deere engines in 2005, we just never had any trouble with them. John Deere has proven to be one of the engines of choice, and we literally have hundreds of John Deere engines that perform in these extremes."

Over the course of the company's 10-year history, Ortowski has seen a dramatic shift to high-horsepower pumping units that can move higher volumes at faster rates. The John Deere-powered pumping units are used primarily to transfer water from a water source through above-ground pipes to fracking storage tanks.

"The support from engines, inc., is second to none," Ortowski notes. "They have been incredible; they are there to help us with anything."

ORTEQ pairs the John Deere power unit with Cornell pumps. The units are customized to customer specifications and mounted to either a bumper-pull or goose-neck trailer. ORTEQ sells pumping units direct to customers as well as renting them through its sister company, Aquacore Rental Company.

"John Deere engines are the most reliable, and they are easy to work on in the field," says Sepulvado. Ortowski agrees: "It all comes down to preventative maintenance. If you maintain the engines properly, they will last a long time. We have units with 20,000 hours that are still working in our fleet."

Yet sometimes there's still a need for John Deere dealer support and service. "We have a good relationship with dealers everywhere we operate," Sepulvado says. Among them is AirGen Equipment LLC, a John Deere service dealer in Odessa, located in the heart of the oil-producing region of West Texas. "They really prioritize our needs. They get the equipment in and out, and it's always fixed right — at a fair price."

Proud to power oil and gas

Ortowski says John Deere pumping units continue to populate the petroleum regions of the United States. "John Deere engines are really held in high regard in the oil and gas industry," he says. "A lot of water-transfer pumps are now powered by John Deere engines. They have proven to be really reliable. The engines just start and run all day long."

John Deere has proven to be one of the engines of choice, and we literally have hundreds of John Deere engines that perform in these extremes.