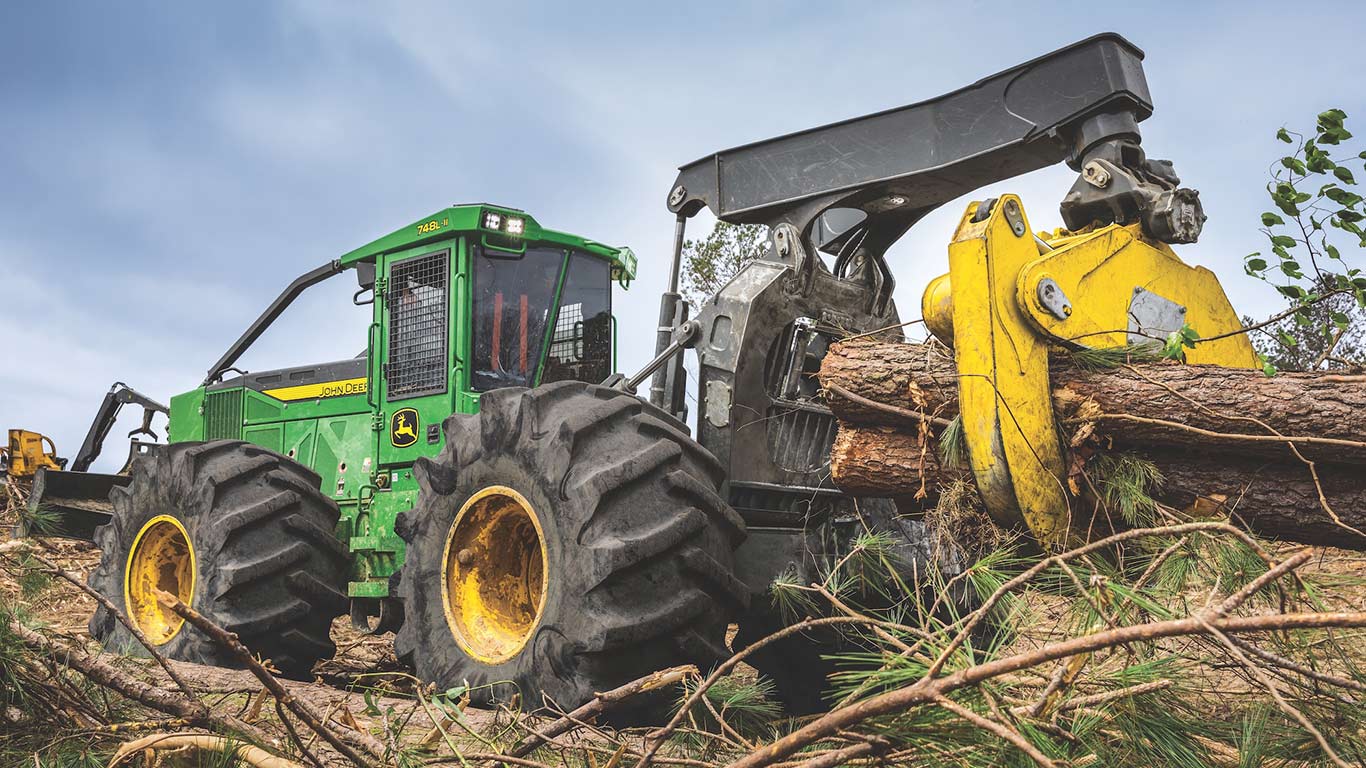 MOLINE, Ill. (Sept. 18, 2018) — Continuously evolving to better its machines and exceed customer expectations, John Deere is excited to introduce the new L-Series II Skidders and Wheeled Feller Bunchers. The new L-Series II machines feature a simplified design, providing a reliable, powerful solution, while still maintaining the productivity-boosting features of the original line, including an increase in hydraulic speed, large grapples and an improvement in weight distribution.

"With the new L-Series II machines, we wanted to build upon the best features of the original machines, while also simplifying the design to increase reliability," said Brandon O’Neal, product marketing manager, John Deere Construction and Forestry. "Listening to our customers, we reworked the machines, making significant improvements under the hood. The new L-Series II machines offer decreased downtime without any changes to power and productivity."

The new, simpler L-Series II models enhance customer experience by reducing maintenance and increasing uptime due to a number of part changes. Other changes to the machines include a reduction to the complexities of the electrical and hydraulic systems and improvements to component placements. "They [John Deere] rerouted it so the wires wouldn’t be so bunched up in the machine," noted Wayne Sugg of Sugg Logging, who was one of the first loggers to test the new machines. "Since we've had the L-Series II 843 we've put 300 hours on it and haven't had any downtime whatsoever. Uptime is important, because if the wood's not going out getting on the trucks I'm not making any money."

The L-Series II machines also include changes to boost productivity. The new skidder models offer increased grapple squeeze force of up to 10 percent. Articulation steering sensors improve the operator experience, ultimately increasing productivity. A new two-speed 4000 winch replaces the previous single-speed winch. "The machine is better, stronger and faster than the original. These machines - on a daily basis - they just they take a beating. The more you beef it up, the stronger it’s going to be, and the better it’ll be for us." said Zane Winfield of Southern Logging, who also got a chance to experience the new machines.

The L-Series II Skidder models feature the powerful Continuously Variable Transmission (CVT), which combines the smoothness of a hydrostatic transmission with the fuel efficiency of a lockup torque converter. This combination enables the skidders to boast excellent fuel efficiency, longer engine life and enhanced operator comfort.

Offering a one-button Quick Dump feature, the wheeled feller bunchers improves efficiency with the push of one button to release trees in a single, smooth motion. Additionally, the head-tilt and arm functions are combined to help minimize fatigue while improving productivity.

Another industry-changing feature on our skidders that carried over from the previous models are the durable axles – particularly the Outboard-Extreme™ axles. The models feature a pressurized continuous-lube system and independent axle filters that extend wear life. The rugged Outboard-Extreme axles – standard on the 848 and 948 models, and optional on the 748 machines – feature larger components, delivering maximum jobsite durability and a heavier weight for boosted machine stability.

Deere & Company (NYSE: DE) is a world leader in providing advanced products and services and is committed to the success of customers whose work is linked to the land - those who cultivate, harvest, transform, enrich and build upon the land to meet the world's dramatically increasing need for food, fuel, shelter and infrastructure. Since 1837, John Deere has delivered innovative products of superior quality built on a tradition of integrity. For more information, visit John Deere at its worldwide website at www.JohnDeere.com.