On the east coast of Texas along the Gulf of Mexico lies the Port of Corpus Christi. On any given day, large seagoing commercial vessels are anchored in the deep water awaiting the loading and unloading of cargo. About 753 million metric tons (283 million U.S. tons) of cargo moves through the port annually, making it the fifth largest port in the United States in total tonnage.

Located in Aransas Pass, Texas, G & S Marine crew boats are strategically positioned to make daily treks to and from the large seagoing vessels to transfer personnel and supplies. Among them is the Gulf Star. The 65-foot (19.8-meter ) crew boat is Coast Guard certified for 34 passengers and two crew members and has deck space for 16 pallets of supplies and up to 3,785 liters (1,000 gallons) of both fuel and water.

The Gulf Star has been dutifully plying the Gulf waters since 1976, weathering the cyclical rise and fall of energy and agricultural industries over the years. The crew boat is on call around the clock, ready to respond to any call-out service, whether it's for routine scheduling or emergency response.

Its clients include vessel owners and agents, construction companies, oil companies, and even movie and television production crews. Discovery Channel hired Gulf Star to take film crews into the Gulf of Mexico to obtain footage for the TV program "Shark Week." The vessel also takes government officials to ships to perform customs and immigration inspections. 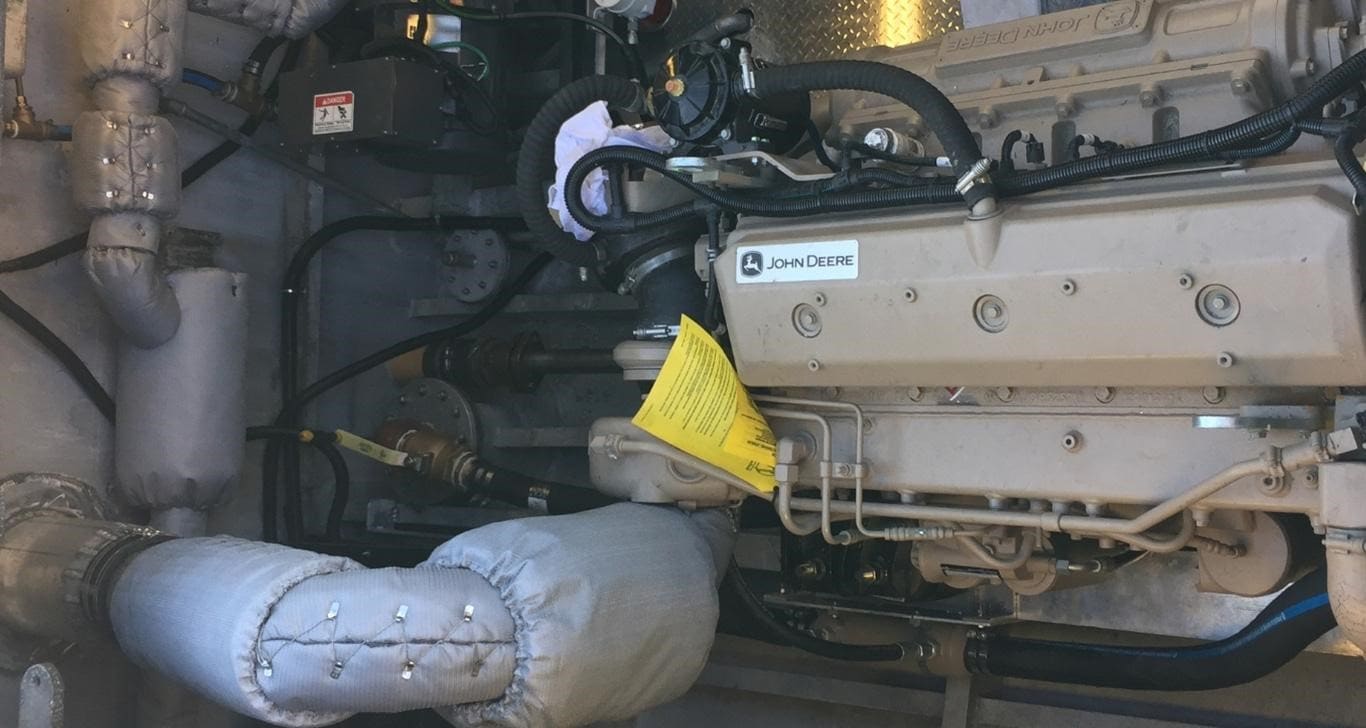 "We talked with local marine dealers and heard a lot of good things about John Deere marine engines," says McRae. That brought him to Billy Pearson at Mid Coast Engine & Transmission, Inc., in Aransas Pass. He and his staff recommended engines that were "exactly what I was looking for," says McRae: twin John Deere PowerTech™ 6135SFM Tier 3/Stage III A engines.

G & S Marine worked with a local shipyard to replace the old V-12 marine engines with in-line, 6-cylinder John Deere engines. "The engines fit very well," says McRae. "We didn't have to cut the engine beds; we only beefed them up to accommodate the increase in horsepower. We installed Twin Disc 5114 transmissions (2:1 gear ratio) and 81 by 86-centimeter (32 by 34-inch), 4-blade Michigan Dyna-Quad propellers."

After more than 1,500 hours on the water, McRae and James Hatch, Gulf Star's boat captain, were impressed with the repowered engine speed, power, and fuel economy. Even with supplies on deck, Gulf Star has the power and torque to maintain cruising speed. Hatch notices the performance difference when punching through waves. "When we're in a trough, the engines have the horsepower and torque to work through the next wave and still maintain cruising speed."

The engine's fuel economy improved, too. At cruising speed, the Gulf Star consumes about 20 percent less than before the repower. And sound levels? "To me, there's no comparison," says McRae. However, engine reliability surpasses it all. McRae concludes, "In the commercial crew boat business, downtime is a killer and doesn't look good. We've been doing this for 24 years and have a lot of clients and repeat customers. Having a dependable crew and engines makes my job a lot easier."

Having a dependable crew and engines makes my job a lot easier.