You have it or you don’t. 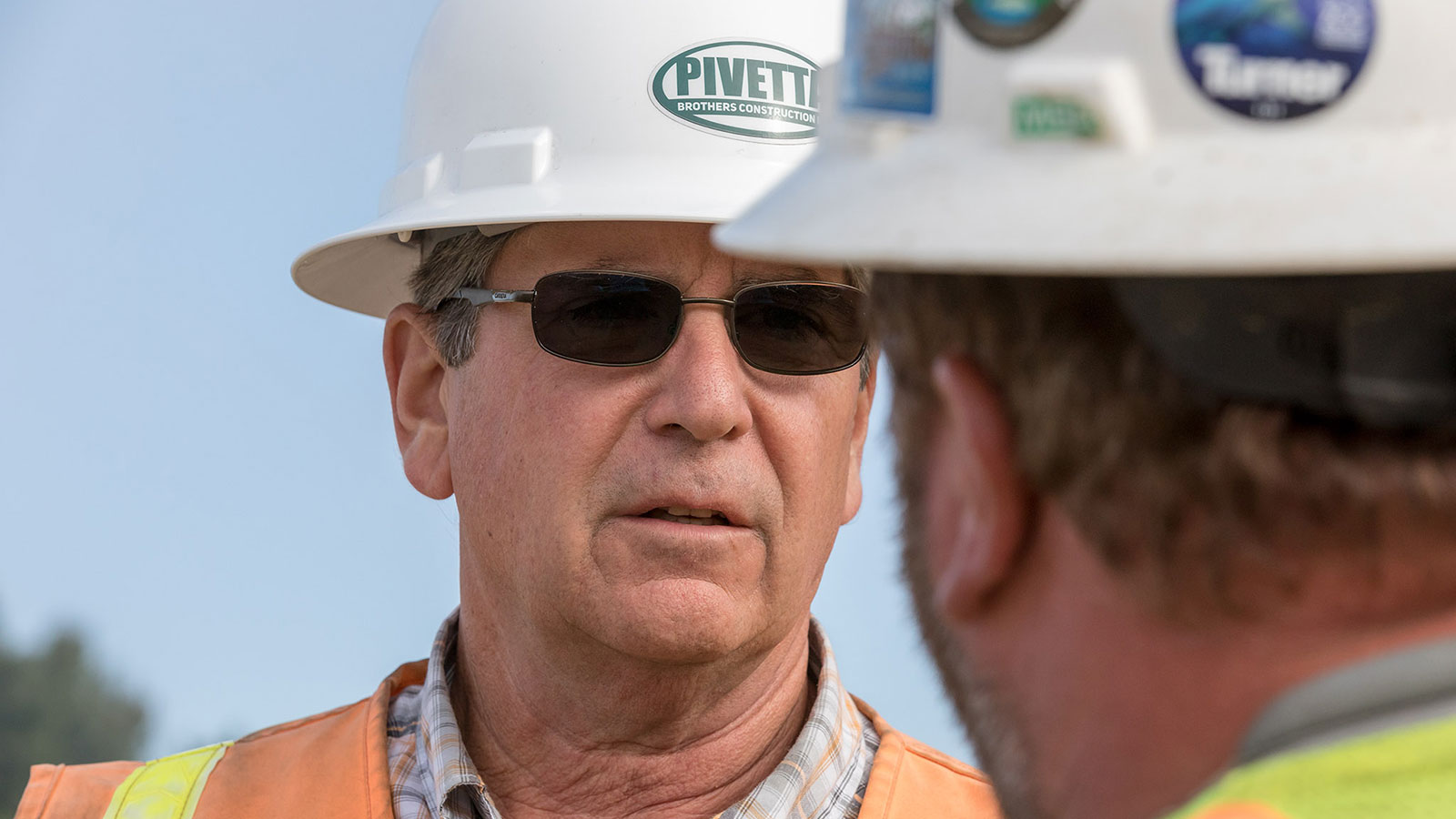 As for Mark Pivetta, founder and president of Pivetta Brothers Construction, there's no question about it. His love of big equipment and self-confidence have led to an interesting life. "Well, if another guy was able to figure out how to do it, why can't I?" Pivetta asks with remarkable humility and candor. "Sure, there are certain steps you need to take and tricks you learn along the way, but for the most part we're just moving dirt and installing pipe — it's not rocket science."

Having spent his entire life in the industry, Pivetta has picked up just about every trick there is. As a young boy, if he could hear equipment running in the distance, he'd manage to work his way there and onto the jobsite, often missing lunch at home. Then at 19 years old he started as a mechanic apprentice, running all over Washington State making service calls all hours of the day and night. "Eventually I decided that working on everyone else's equipment was not what I was here for, so my brother and I decided to buy our own bulldozer and backhoe in '79." But they didn't branch out on their own all at once. "It was weekends, vacations, and days off from our regular jobs. There really wasn't a day of the year we wouldn't or didn't work."

The biggest stepping stone for the brothers was winning their first pipe job. "A truckload of pipe showed up and we looked at each other — I said, "You ever installed this stuff?" My brother goes, 'Nope.' I said, 'Well, I guess we'll figure it out then.' " It appears Pivetta's had no trouble doing exactly that ever since.

Based in Sumner, Pivetta has his fingerprint just about everywhere in western Washington. "I didn't appreciate it as much when I was younger, but I do have a sense of pride now. I can drive all over and point out projects we've done through the years and know we did them right." There certainly appears to be no shortage of those, as Pivetta typically has at least 10–15 jobs in progress at any given time.

With the ports of Seattle and Tacoma being the fourth-largest container gateway in North America, Pivetta has been keeping his crews busy within a niche market — helping develop warehouse spaces. "We'll be there pretty much from start to finish. We're taking it from erosion control to the preload, to cutting footings, then to the capillary break and site utilities, which consist of sewer, potable water, and fire-protection water. Next come the retention ponds, filtration systems, and various sizes of stormwater piping. When the parking lot and truck bays are finish-graded and paved, the sidewalks are poured and we'll be done with the job." When everything is wrapped up, it will be a 525,000-sq.-ft. space. The second warehouse project will be a 640,000-sq.-ft. complex with similar job requirements.

At the end of the day, every human being likes to be proud of what they have accomplished. 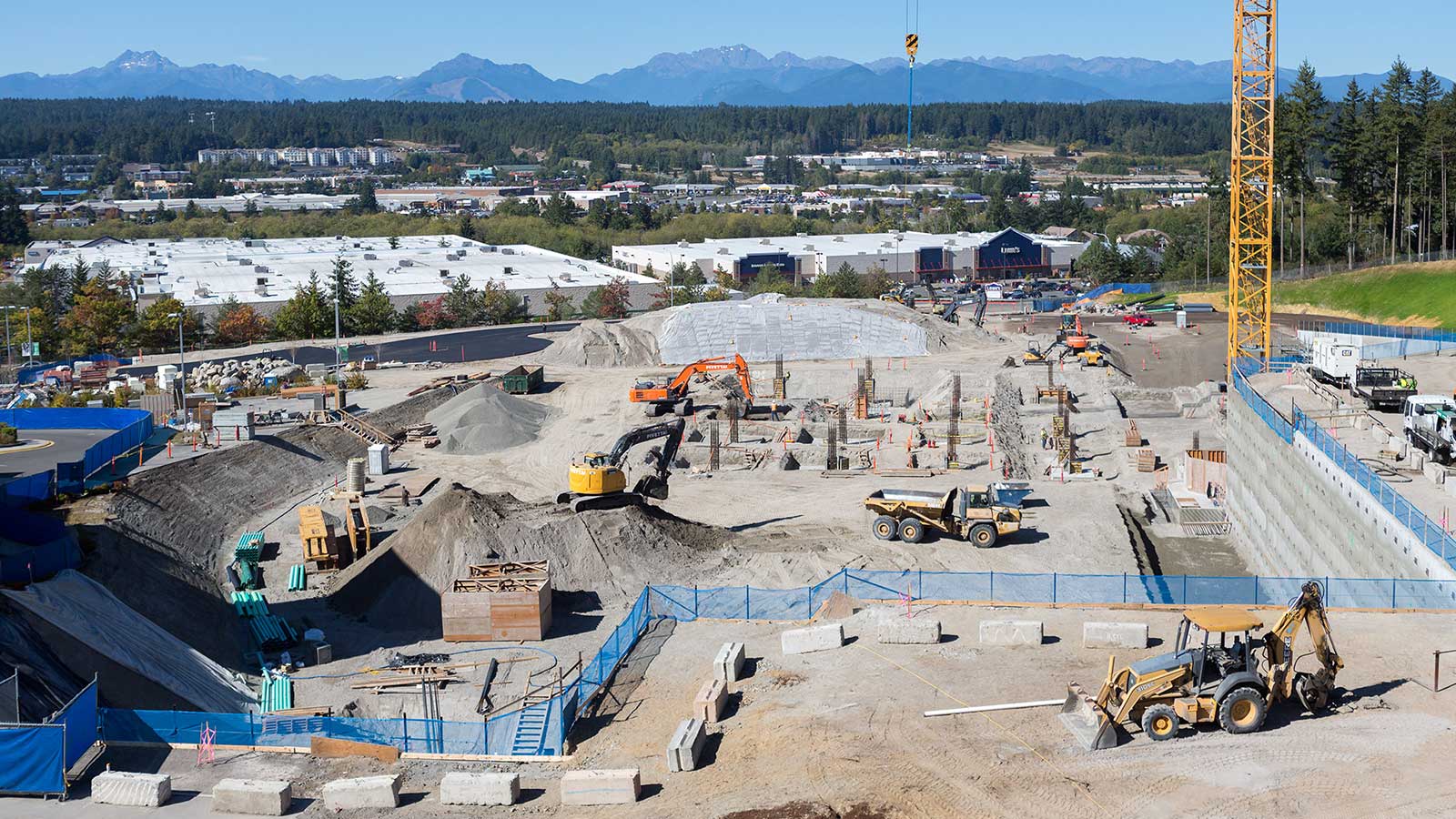 Next up is a project Pivetta takes special pride in — and for good reason. "We're in the third phase of the Harrison Hospital project now — we've already excavated and hauled out 105,000 yards of material. Now we're digging all the footings. After that, we'll excavate for electrical and plumbing; do the civil work for the storm drain, water and sewer, and fire-protection system on the outside; and get it ready for paving."

Moving 105,000 yards of material in a tight space in under two months is no small feat. So how did Pivetta manage to make it happen? "We had a new John Deere 1050K Dozer and a new 470G LC Excavator, and those machines really made — I mean — they made a huge difference. We were moving in the neighborhood of 2,700 yards a day out of the hole and offsite. The 1050 was feeding the 470, and the 470 was loading out 30 tons in 59 seconds — it was very impressive. The proper planning of crew and equipment has made this job successful."

Pivetta is quick to acknowledge his people as his most important asset, and he knows they need quality equipment in order to complete their work to his high standards. "The most important aspects I look for in machines are their reliability, product support, and overall costs per hour. We have machines with over 12,000 hours on them, and they still run every day with just preventative maintenance. They're very reliable machines."

He also highlights the importance of dealer support. " Papé , our local dealer out of Fife, Washington, has been an excellent partner in the machinery end of our business. They have put together excellent financing packages, they have great parts and service, and their sales department has been excellent to deal with. They know what we need, have the programs that help us get the equipment out here on the jobs, and help us on the rental end of it as well. They're a good family-owned company, and we work closely together.

"The secret is in partnerships — I can't do it all myself. It's the people I've brought along on the journey, and it's all worked out for us."