Reviving Tradition at the Mecca of Racing

And the technology that helps make it happen

As the pace car flees the track, the roar of 24 engines packed with over 400 horses of pure fury collectively redline, blasting the go-kart-sized midget cars around the track at an explosive pace. The cataclysm of controlled chaos is striking, filling the chests of thousands of spectators with thunder — which is further amplified and rivaled by the crowd’s roars of excitement. As the dirt flies and adrenaline surges with every jockey of position, the greatness of this age-old tradition is made all the grander by its high-profile setting.

The Indianapolis Motor Speedway (IMS), the birthplace of Indy cars and incubator of racing innovation, continues to set the pace by expanding on its 109-year history. September 2018 marks the green flag flying for the first sanctioned dirt-track race on these hallowed grounds.

Three primary parties have made the new dirt-track venture possible. The United States Auto Club (USAC), the world's largest race-sanctioning body, has been the primary driver.

"Our main goal is getting the next generation excited about and involved in racing," explains Kevin Miller, president and CEO of USAC. "Whether in a go-kart or Indy car, where better to host races than at the track every 13-year-old dreams of driving someday? Many Indy and NASCAR™ racers come up through dirt tracks, and bringing that tradition to IMS is something we're very excited about."

As for the folks performing the dirt work on the track, there's a unique tie to the project. "We actually own a race team of three vehicles, each with its own driver, that travels the full circuit to all national events," says Scott Petry, founder, owner, and president of Petry Excavating of Greenfield, Indiana. "There's so much history at Indy. I was honored when they asked if I wanted to be involved."

Lastly, West Side Tractor Sales of Indianapolis donated the equipment and technology for the project. "On-site here, we've got a 317G Compact Track Loader equipped with the Leica Level-Best system, a 750K LGP Dozer with SmartGrade™ technology, another 750K LGP Dozer with Topcon aftermarket technology, and a Topcon-ready 772GP Motor Grader," Mason Adkins, grade control specialist for West Side, lists the impressive lineup of equipment. "Tying all that technology together is our Kespry Aerial Intelligence System." 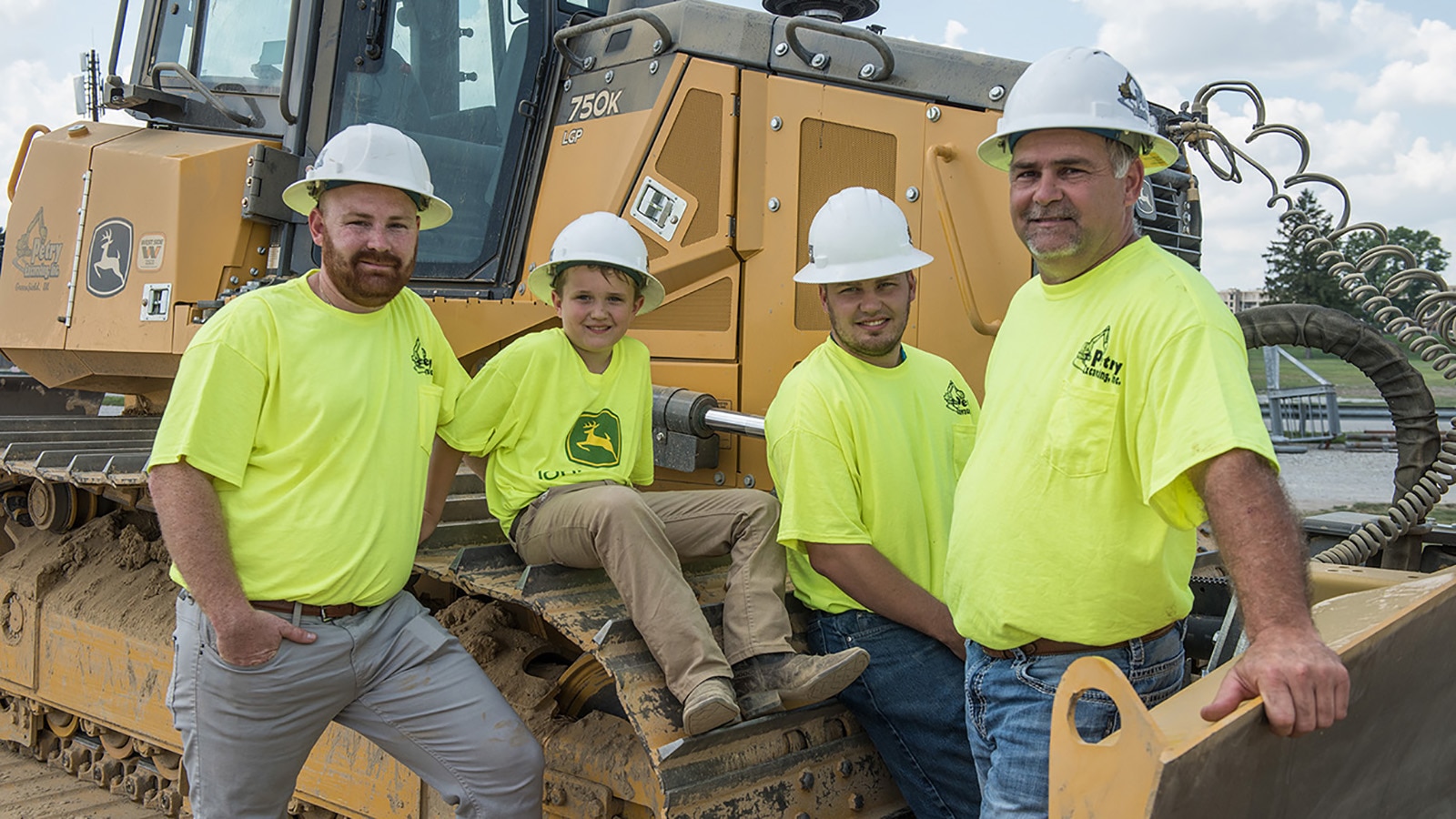 Kyle, Carson, Keenan, and Scott Petry are the three generations that make Petry Excavating a family company. Other members of the clan are Scott’s sons Carter and Kirby.

A HISTORY OF INNOVATION

Where better to implement cutting-edge technology than at IMS, a racetrack purpose-built for spurring innovation? "We're pretty much pulling out all the stops on this one," explains Adkins. "They wanted to base this new track at IMS on the Kokomo track just north of here, so we flew the Kespry drone to gather that survey data. Then we mapped it onto the Google Earth image of IMS and adjusted the data points and track size to fit the space."

Getting the base information was just the start of the Kespry system and GPS technology advantage. "After test-running the track, we realized the smaller version set corners that were too tight for this type of race. The files are flexible, so all we had to do was adjust the data in the CAD file and re-upload it to the machines. From there you pretty much press 'go' and the machines do the work."

According to Adkins, the best part about the technology is how simple it is to use. "I can hand a customer the iPad, and they'll have the site set up and the drone running within five minutes. It's extremely user friendly."

As for Petry, the return on investment with SmartGrade is what sealed the deal. "We're a smaller company, so it was a big chunk to bite off, but it paid for itself in six to eight months. We did a big parking-lot project without the technology that took about four-and-a-half days to finish. The next week we put the technology on and did a similar job — a nine-acre lot and building pad — and finished grading in a day and a half, with two guys instead of six. We'd never go without it now."