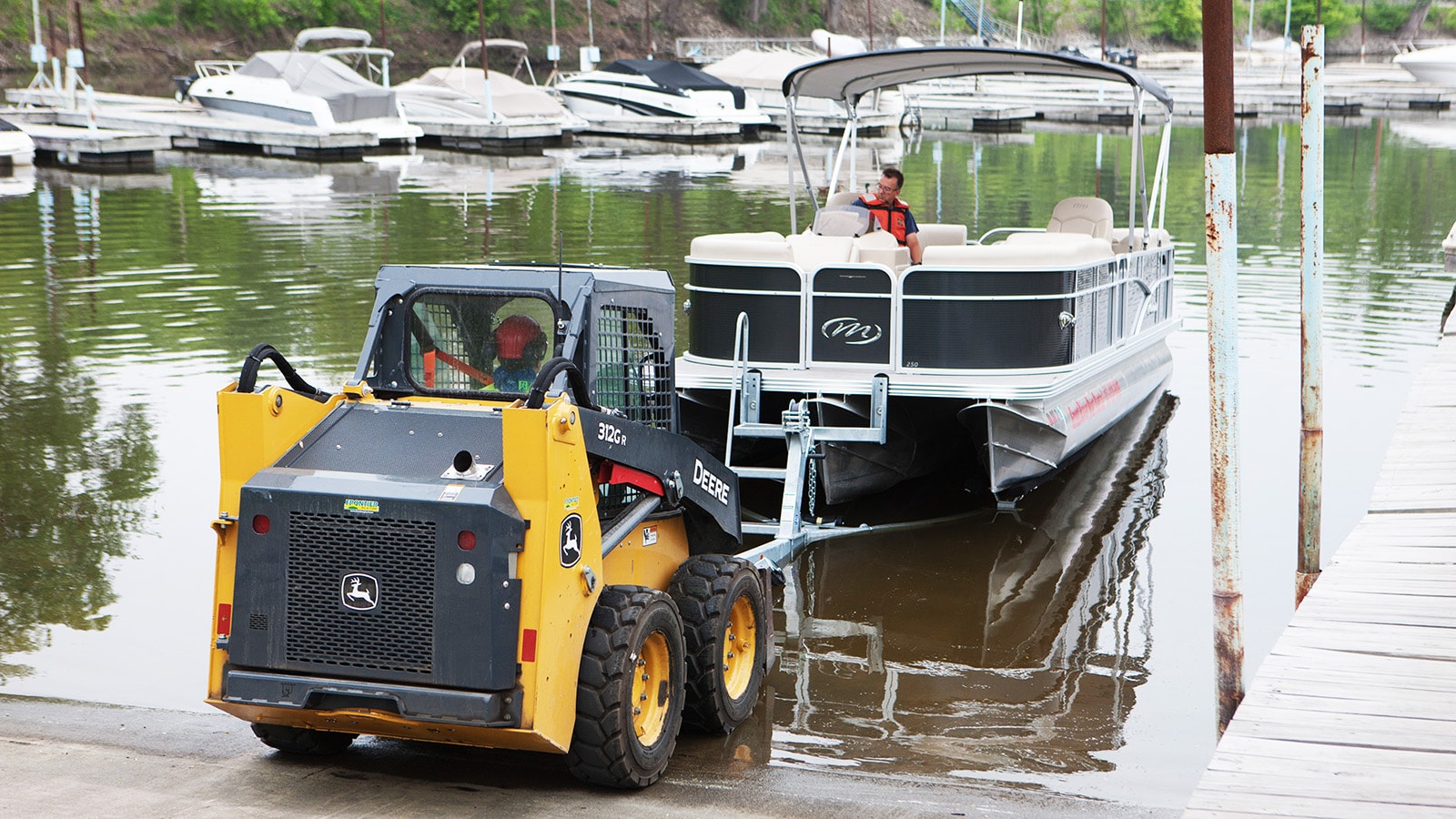 Bill King, owner of King’s Cove Marina in Hastings, Minnesota uses a 312GR Skid Steer to pull a pontoon boat out of the water.

The Mississippi River lies deep within America’s character and consciousness. It’s the waterway of riverboat gamblers and commerce. It provided sustenance for Native Americans and transportation for explorers and fur traders. As America expanded west, settlers on steamboats began populating cities along the river. Mark Twain wrote about it, and it is immortalized in popular culture in songs such as "Big River," "Proud Mary," and "Old Man River."

In his youth, Twain was a Mississippi riverboat pilot, an experience that would inspire The Adventures of Huckleberry Finn and other books. "The Mississippi River will always have its own way," Twain wrote. "No engineering skill can persuade it to do otherwise."

Bill King, owner of King's Cove Marina in Hastings, Minnesota, would agree with Twain. His marina is located near the confluence of the Mississippi and St. Croix rivers, so he’s seen his share of floods, including the "big one" in 1993.

Maintaining the land surrounding the marina is key to mitigating the effects of flooding. King owns close to 280 acres in and around the marina. He hires a logging crew to manage timber and uses a John Deere 333G Compact Track Loader (CTL) for tilling and preparing the ground. "It's really important to keep the floodplain of the forest active, because every year we can expect some flooding," he says.

The tracked 333G CTL is well suited for this work. Equipped with a mulching head, grapple, dozer blade, or bucket, the 333G can clear brush, open up trails, prep soil, and grade. "It helps us with whatever we’re doing," says King. "It's versatile, efficient, and very powerful."

King is unflappable when it comes to the flooding. "I don't lose a lot of sleep over it. You figure out what you have to do. You say to yourself, 'This is what has to be fixed immediately, so guess what? We’ll get it done.' And John Deere equipment helps us do that. Every year is different, and we just have to adapt. It makes things interesting, for sure."

ROLLIN' ON THE RIVER

King's father started King's Cove Marina in 1965. King began working in the business when he was a young boy, cleaning up and doing odd jobs. He took over from his father 10 years ago. Over the years, the marina has grown from about 100 slips in the 1960s to over 400 slips today for cruisers, runabouts, houseboats, and pontoon boats.

The marina lies within the 72-mile-long Mississippi National River and Recreation Area, providing scenic cruises and excellent fishing on the Mississippi and St. Croix rivers. "It's a fun business to be in. A lot of families come down and enjoy what we have here. I really believe we are helping our community."

Mid-May at King's Cove Marina is a busy time of year for King and his staff. They must haul almost 300 boats out of winter storage and dock them with the help of a John Deere 312GR Skid Steer. In the fall, the process is reversed when the boats are returned to storage.

The marina has grown so much in recent years that King has taken to buzzing around the docks on a Segway®. He misses the exercise, but he can't keep on top of everything on foot. "As business grows, we keep adding more docks. And as the boats get bigger and bigger, we make larger and larger docks."

Like the Segway, the 312GR Skid Steer helps King get things done quickly and efficiently. "The 312GR is perfect for getting into tight areas and through narrow openings where other machines can't go. It’s not too small and not too big. It's got plenty of horsepower for our needs around the marina. We can move our boats around without delays or problems."

The King family has run John Deere equipment for almost 50 years. "The machines simply work. They're easy to maintain and service. And we get great support from our Deere dealer, who does whatever is necessary to keep us up and running. And that’s what it’s all about."

There are so many facets to running this business… John Deere helps us adapt by doing things quickly and efficiently.

The boating business is pretty fluid, no pun intended. But King is optimistic about the marina's future, though the industry is changing. "I think we’re going to see some overall growth, but buying patterns are changing.  We're seeing more pontoon boats and runabouts, and fewer big boats. People are more mobile and not staying in the same area as long, so they're less likely to buy large boats." Data from the National Marine Manufacturers Association (NMMA) supports King's observations. The NMMA expects a five- to six-percent increase in new powerboats in 2018. However, 95 percent of boats in the U.S. are small in size, defined as less than 26 feet in length.

There's never a dull moment at King's Cove Marina, and that's what King likes about it. "There are so many facets to running this business — making sure everything is working and customers are happy. And the economic and natural environments we work in are constantly changing. John Deere helps us adapt by doing things quickly and efficiently."