The Other Side of the Fence

The public’s perspective isn’t always what you may think! 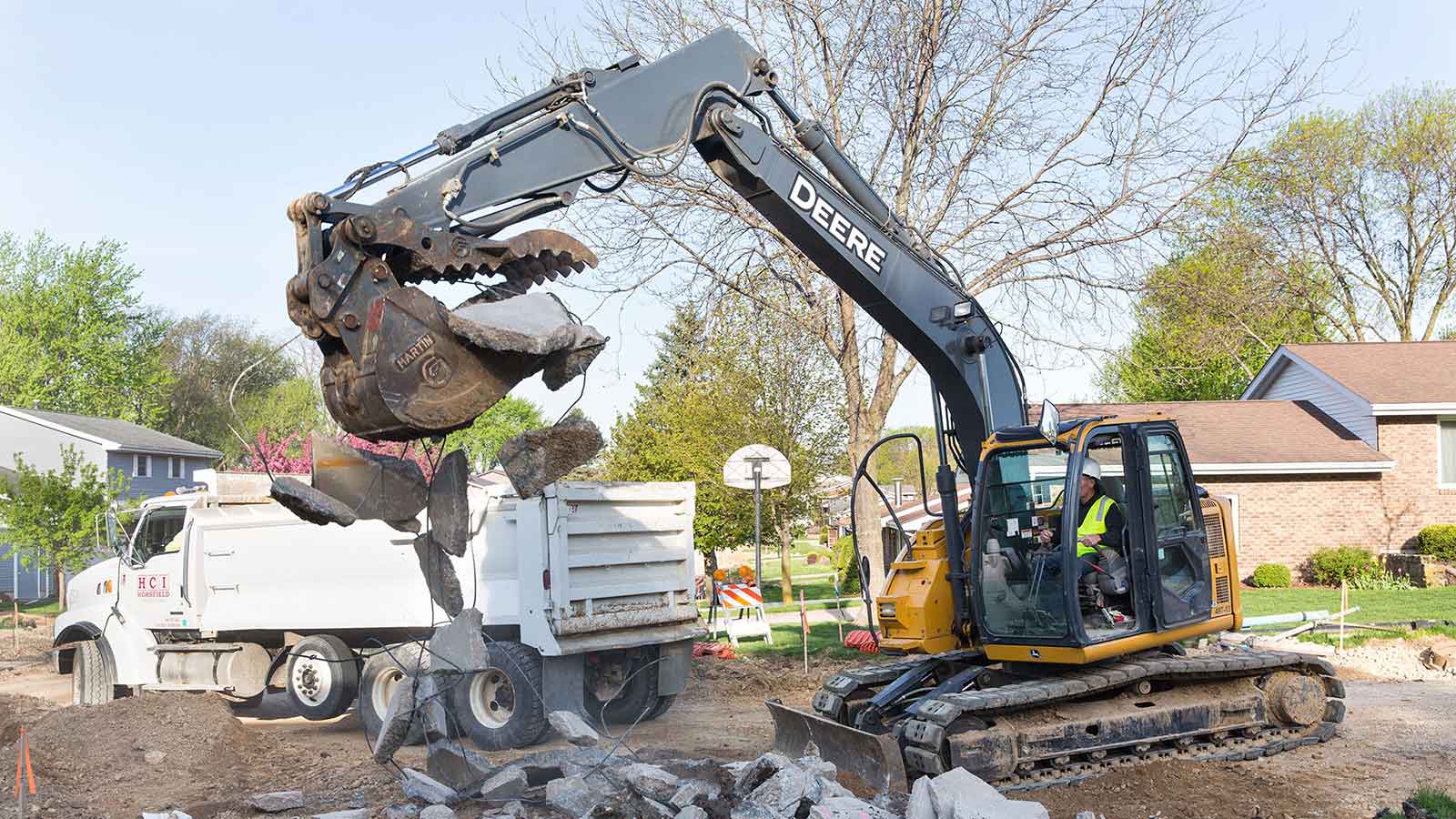 Can you imagine a world where the general public appreciates the work you do? One where they don't honk because their commute is temporarily increased, but instead wave and smile each morning. Where they recognize that the backbreaking labor you engage in day in and day out is in their best interest, so they can have a more comfortable life. And instead of asking, "C'mon, how much longer is this gonna take?," they inquire with wonder, "How did you do that?"

Believe it or not, this utopia isn't as far off as it may seem — just visit this friendly neighborhood west of Dubuque, Iowa.

I don’t think we’ve ever had someone so interested in what we we’re doing.

After a city water main burst, it was decided the time had come to replace a whole stretch of pipe in the area. Successfully completing such projects since 1984, local company Horsfield Construction was brought in to get the job done. While the work turned out to be as expected, the location proved to be a little different than most jobsites.

"It's not uncommon to have people tell you how they think your job should be done," starts Rod Horsfield, part owner/general superintendent at Horsfield Construction. "But hey, some of these folks actually do know more than us — at least about the machines." You see, Dubuque is home to the John Deere Dubuque Works factory, where construction equipment such as crawler dozers, crawler loaders, skid steers, and backhoe loaders is manufactured. And the neighborhood where the work was being done happens to be home to a number of retired John Deere employees. 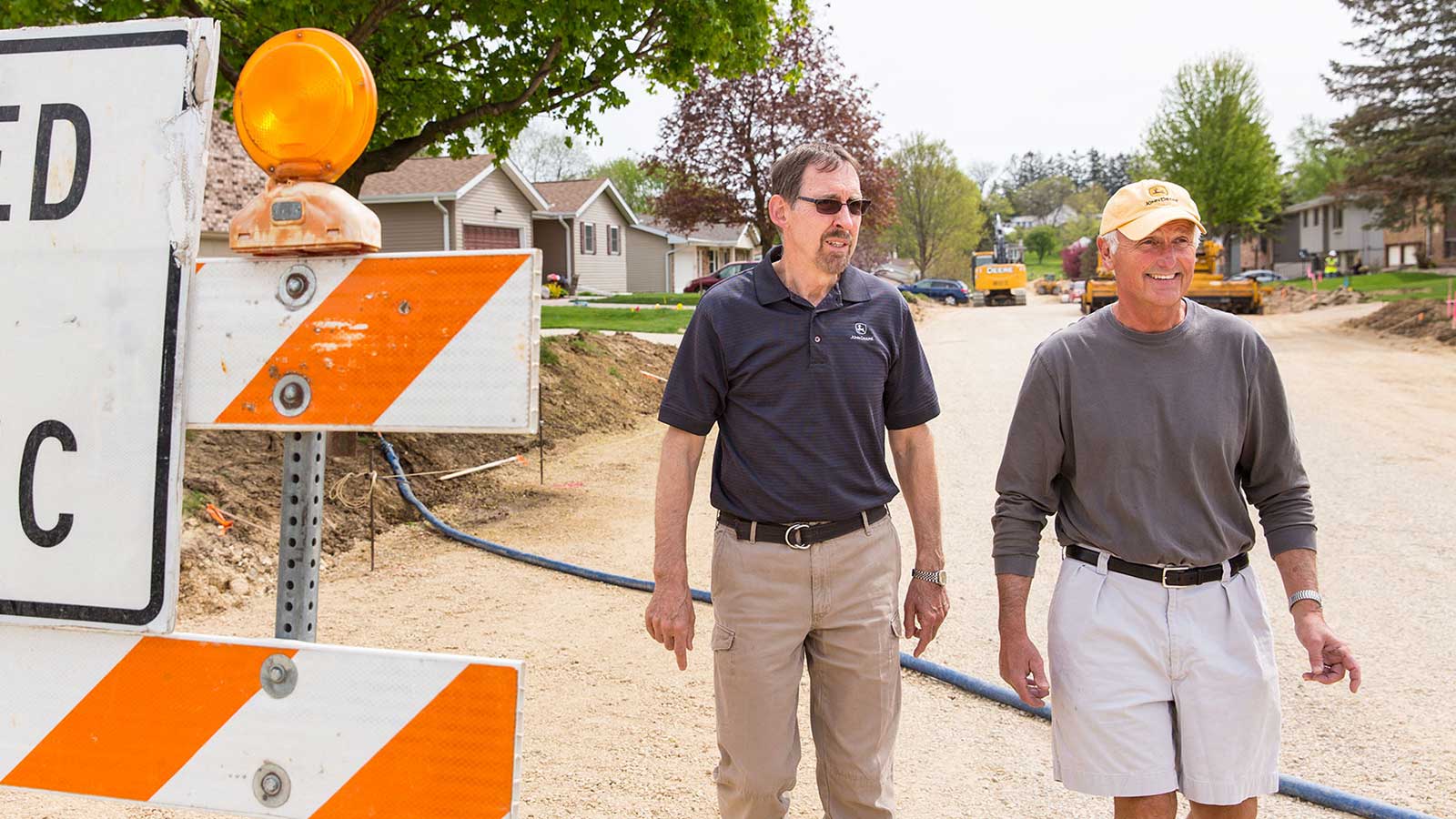 "I've been out here every day taking pictures and documenting the progress," resident Russ Hefel gladly tells us. "From the time they tore up the streets to when they put in the water main, I probably have 75–80 pictures. Just about every guy has seen me watching, interested in how they're gonna do it and how long it takes. Being an old supervisor, I thought they might need some prying or to be poked along, but they worked hard and kept busy. It's been fun for me."

"I don't think we've ever had someone so interested in what we're doing," says Horsfield. "We even asked Russ if he wanted to connect the final main — I mean he had been with us pretty much through everything else!" The passion is somewhat expected, as Hefel comes from a family steeped in John Deere. He and his four brothers and sister have all dedicated at least 30 years each to the company, some on the management side and others union. "Over the years we've had some colorful conversations. In the end, we all agree it was a great place that gave back. The reward was worth the work you put in."

SUPPORT FROM THE SIDELINES

Another retired neighbor who is finding new rewards is Ron Bensink, who most recently worked in the Dealer Technical Assistance Center and focused on excavators. If a mechanical issue could not be addressed on the phone, he traveled onsite to troubleshoot and correct whatever the problem was. "Having contributed so much time to the machines' development, it's been a real treat seeing all the Deere equipment Horsfield has out here. Being able to watch them closely on this job gives me a real appreciation for some of the advances made over the years."

Most of what Bensink appreciates isn't too surprising. "The quietness of the machines, especially when they are working right in my front yard. Diesel engines have evolved tremendously over the last 15 years. Typically, diesels were known as dirty, smoky, smelly engines that made a lot of noise. The modern engine is so technically advanced you can hardly hear them run, and emissions have been decreased dramatically." What is a little surprising is how selfless Bensink is about another aspect: "A reliable machine puts a guy like me out of work," he openly admits. "But a reliable product is a marketable product, and that means the company can make money, and the customer can, too. It's been gratifying seeing all the work being done and knowing I've contributed in some small way." 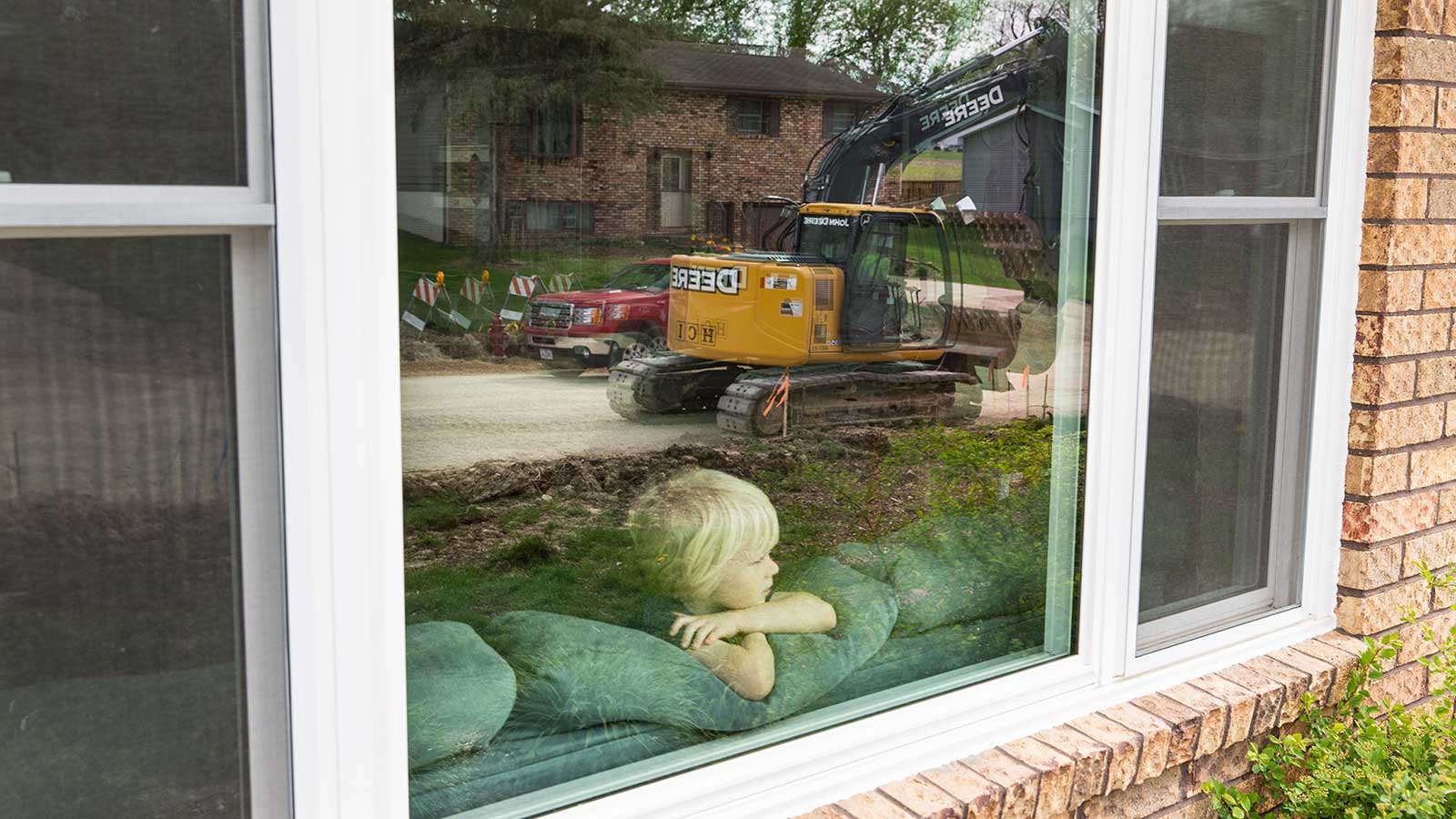 THE FUTURE OF THE INDUSTRY

Another local resident excited by the work is four-year-old Charlie Koelker. He spends every available minute watching the machines in action. "You'd be surprised," remarks Charlie's mom, Annie Koelker. "Having the construction going on actually makes my life easier. Little Chuckles here is too captivated to get himself into any other trouble, so I can't complain!"

When asked what he thought of all the work going on, Charlie responds, "I like trucks!" It's easy to see a bright future for this one. Who knows, maybe one day Charlie and his own construction company will be featured in The Dirt.

ALL IN A DAY'S WORK

As the day winds down, Horsfield confirms the reports from the neighborhood. "Former Deere employees like it when we are in front of their houses using Deere equipment. It definitely seems to make a difference as far as getting along with people. Dubuque is a big Deere community, and we like to support that."