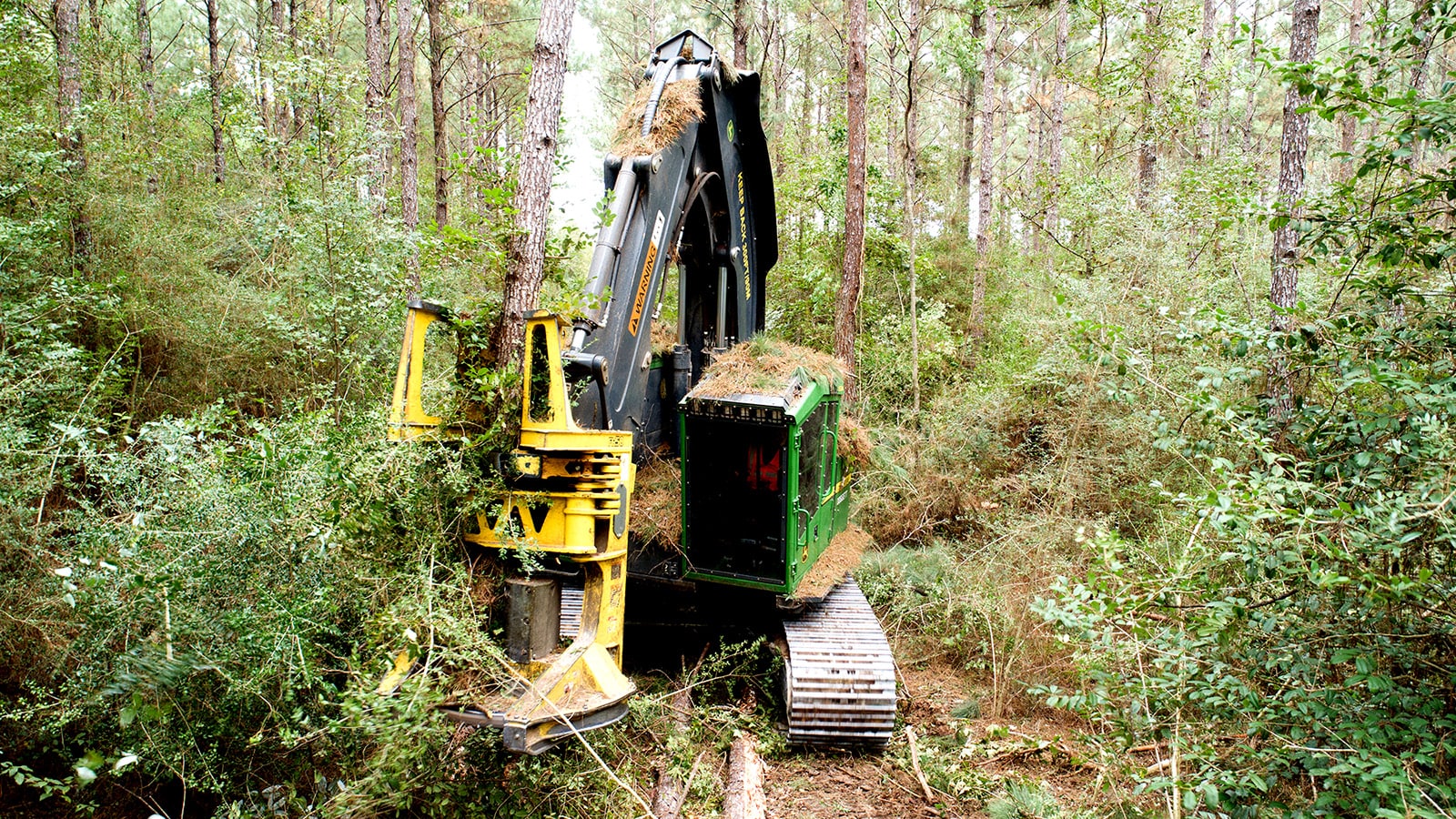 Money really does grow on trees, at least according to a sign that once read, “Welcome to DeRidder, Louisiana, where money grows on trees.”

“Back in the late ’70s and early ’80s, my family were stump loggers in Mississippi,” recalls Thomas Johnson, owner of Thomas Johnson Logging in DeRidder. “They’d push up old-growth stumps that would be used to make turpentine. They were headed to East Texas looking for work when they were passing through DeRidder and came across the sign. My grandpa and two of his brothers thought, well, let’s see what this is all about. They stopped in at a café and the man who owned the local stump plant happened to be there. So they went back to Mississippi and got all their belongings, and here we are today.”

Over time, Johnson’s grandfather graduated from stump logging to pulp logging. His father started his own logging business in 1999. From a very early age, Johnson would accompany his father out in the woods on weekends. “I’d just sit and watch, or I’d ride around with him in the logging truck. I learned a lot. As I got older, I started running the chain saw and the skidder. I also learned how to be a mechanic and started doing repairs.”

He remembers his first full day on a skidder. “I was working a watermelon field for my grandpa and my mother told me the skidder operator was sick. So I filled in. No air conditioner and, boy, was it loud. Skidders have come a long way.”

In 2006, Johnson began logging full-time. About 14 months ago, he started a company with his dad, and he’s working toward making it his own company within the next year.

“I’m proud to be a third-generation logger,” Johnson says. “It’s a good way to make a living, and we’re all about sustainable logging. For every tree we’re cutting, they’re planting three. We’re never going to run out of trees as long as we’re managing the land.”

Logging arrived in DeRidder around the time it was founded at the turn of the 20th century as a railroad town. The first timbermen who worked the area claimed the area had the tallest pine in the world. Not surprisingly, DeRidder’s first house was made of logs. By the time it was incorporated in 1903, DeRidder boasted 300 residents and a sawmill, and harvesting longleaf pine was the largest industry.*

Johnson encountered the area’s rich history firsthand when he came across an unmarked cemetery on a logging site. “It was for Civil War soldiers who were on their way from Alabama to Texas. That’s not something you see every day, especially in an office job.

“That’s what I like about logging — no two days are ever the same. I don’t like routine. I like being pushed and I love challenges. That includes working in wet ground where a lot of people struggle. I’m always the person who says, well, if he can’t do it, I can.”

Today, DeRidder’s population exceeds 10,000 and logging is still the main industry. “The market is pretty good right now,” says Johnson. “It’s picked up a bunch in the past four years, and quotas can be pretty tight.”

The company handles mainly first and second thinnings, typically producing about 60 loads a week. “Because we’re not high production, we focus on being more efficient with our operation and doing a neat job. We can take extra time to look at the trees. The end product is much better for landowners and foresters.”

To keep up with quotas, Johnson’s company currently runs two skidders, two feller bunchers, and two log loaders, including a John Deere 748L Skidder and an 853M Tracked Feller Buncher. “We’re really impressed with the 853M. The high-accumulation FR50 felling head on it has made a big difference.”

I’m a big proponent of technology because it saves you time and money.

Johnson has been one of the early adopters of technology in his region. “I’m a big proponent of technology because it saves you time and money. A lot of loggers around here are still old school, using methods that haven’t changed much since the 1980s. But even my dad is starting to come around. He has John Deere JDLink™ telematics on his tablet, which has allowed us to track machine hours and location, fuel consumption, and maintenance intervals.”

JDLink also provides alerts if there’s a problem with a machine. “You used to have to manually check the machine — oftentimes an operator wouldn’t even know there was a problem. With JDLink, we’ll get an alert about, say, a blocked air filter. That saves money because blocked air filters burn more fuel. Plus our local John Deere dealer can remotely diagnose issues and send a technician out to the logging site with the right part the first time. Not that the machines go down that much. I’ve run the 853M over 2,000 hours and haven’t blown one hose.”

TimberMatic Maps displays a live, up-to-the-minute status of the logging site onboard the machine. Live production and location data is shared wirelessly between the skidder and feller buncher. “We can map out SMZs (streamline management zones), points of interest, skid roads, hazards, and slopes,” says Johnson. “The skidder and feller buncher operator can see where each other is and work together. I don’t have to holler on the CB to tell a skidder to grab a load — he already knows it’s there. And the buncher can see how far ahead he is of the skidder to determine whether he needs to cut harder or shut down early and do service intervals. Operators know where the wood is right now — there’s no guesswork. It’s right there on the screen.”

TimberMatic Maps accommodates all common map formats. Standard satellite or topographical imagery can be loaded directly to the machine. “You can create the map right on the screen. You don’t have to hassle with making your own maps in an office or at home at night, which saves a lot of time.”

In addition to TimberMatic maps onboard the machines, TimberManager allows Johnson to monitor live progress from anywhere, anytime, through his phone or tablet. “I can be at another location or a meeting and see in real time where my machines are located and what progress they’re making. It makes my life easier because I don’t have to constantly call the crew to see where they’re at.”

If Johnson is on-site, he can track progress safely from his truck or at the roadside. “I don’t have to walk around so much anymore. Loggers used to depend on boots on the ground. Now I can look at my phone and see what bunches are left in the woods and what’s at the landing, so it really helps us plan ahead.”

Johnson appreciates John Deere’s effort to keep one step ahead of what loggers need. “Deere really has the mindset of working with the logger. With other competitors I’ve worked with, the attitude has been, ‘Here’s our machine, take it or leave it.’ Deere really talks with loggers and considers their ideas to make their machines and technology better and easier to use.”

Logging has changed a lot since Johnson’s grandfather and father started in the business. But what hasn’t changed are the bonds that have tied the family to each other and to the land. “I’m grateful to continue the logging tradition and teach my kids and other people in the community about logging. It’s something to be proud about. Like a lot of fathers and sons, my father and I butt heads from time to time. But I’ve been able to spend more time with my dad than most people. I feel blessed that our family has had so much time to work with and learn from each other.”

Louisiana logger Thomas Johnson is a big proponent of using technology to boost uptime and productivity.