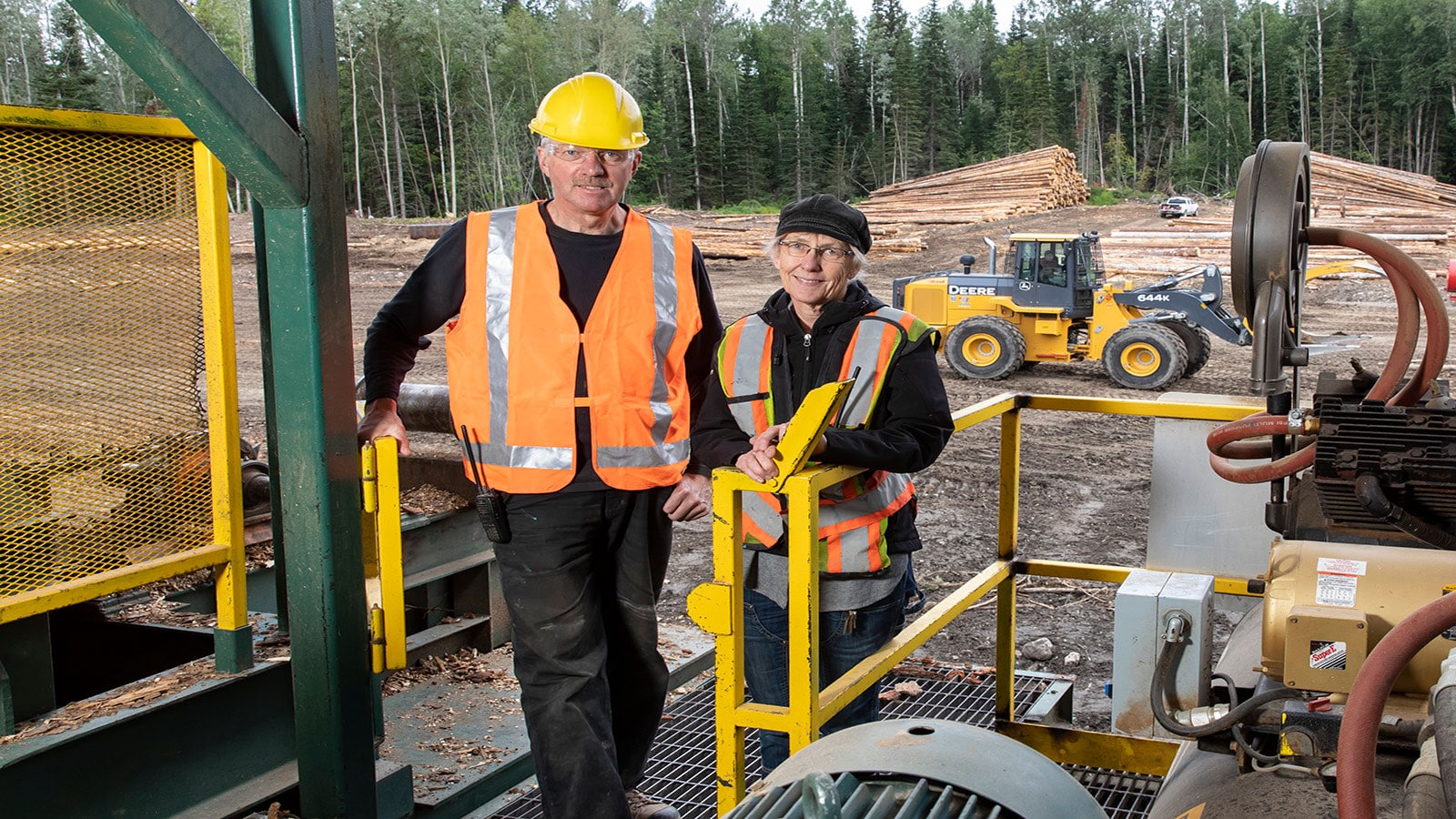 It began at a birthday party in 2015. Kirsteen Laing was turning 60 and invited her child’s ski coach, Andy Thompson, to the celebration. A registered professional forester, Laing had moved to Smithers, British Columbia, in 1986 and started a forestry consulting firm.

Born in England, Laing originally moved to British Columbia at the age of 10 and later received her degree in forestry at the University of British Columbia in Vancouver. She worked in Mozambique as a forester for CUSO International, the Canadian equivalent of the Peace Corps, before traveling the world. Now approaching retirement age, she was looking for a new challenge. “I wanted to find an environmental project where I could keep moving physically, but also use my forestry and administration skills.”

She considered finding a project in Ecuador, where she had spent some time working with a community cooperative and learning Spanish. But the solution was right in her backyard. She had invited the right person to the party.

Out of the ashes
Thompson was in the process of opening his third sawmill near Witset, which is located 30 km (18.6 miles) west of Smithers. When he was 18, Thompson had moved to British Columbia and found his first job working in a sawmill. He moved to Smithers in 1982 with his wife. “We were ski bums and the skiing is great up here. I bought into a welding shop, but I always wanted to build a sawmill.” So he did.

When his wife got sick, Thompson sold his first mill so he could take time off to care for her. He later built a new sawmill in Fort St. James. “Things were going really well until it burned down. It was a disaster really. But we salvaged some of the equipment, trucked it to Witset, repainted it, and completely redesigned the mill. It’s way nicer.”

The location Thompson chose for the new business venture, Seaton Forest Products, is spectacular. Nestled among coastal mountains in the beautiful Bulkley Valley, the mill sits at the foot of Seaton Mountain. Running through the middle of the valley, the Bulkley River attracts anglers from far and wide in search of steelhead, chinook, and coho salmon.

Forestlands stretch out as far as the eye can see and, for Thompson, contained a hidden business opportunity. “We designed the mill with the intention of cutting only decadent wood, the dried-out balsam that big companies leave behind or burn,” says Thompson. “We knew we would be able to source this wood readily and cheaply.”

The project met Laing’s requirement for helping the environment. “If the wood is left in the forest, it becomes a fi re hazard,” she says. “If it is burned, it becomes an air-quality issue.”

Large mills in North America avoid decadent wood because it lacks integrity and can’t be cut into boards. Seaton Forest Products found the perfect market for this wood — China. “We cut the wood into square cants, so it maintains its integrity,” explains Thompson. “We send all this product to China. They’ll use it for scaffolding, pallets, crates, and ‘dragon bone,’ which is placed between drywall and concrete walls.”

Finding work for First Nations
The Wet’suwet’en and Gitxsan people have called the Bulkley Valley home for thousands of years. One of Seaton Forest Products’ missions is to employ mostly indigenous workers. “Eighty percent of our workers are First Nations people,” says Thompson. “That’s about 20 jobs for local families here. They are excellent workers who take a great amount of pride in their work. It’s a privilege to have so many First Nations people. It’s their land and resources so they should benefit from that.”

Laing shares a story of a young man they hired.
“When he showed up for work, he wouldn’t look at you or say anything. He always had his sunglasses on. Slowly he came out of his shell and began talking to people. He took his sunglasses off and started joking around. He was full of fun. He started doing all the jobs and became really valuable. It makes us proud to see success stories like that.”

Keep moving
Laing has found the physical work she was looking for. As the mill was being built, she did most of the painting. She has helped strip the wood of bark and stack lumber, tasks done by hand. She has helped tag and strap lumber before it is loaded onto trucks, then trekking down a hill to run the weigh scales. She also does the administrative work, including payroll, accounts receivables, shipping, and reporting. It’s all in a day’s work.

Laing and Thompson are extremely hands on. “We get right out there and sweat — or freeze — with our employees,” says Thompson. “My motto is, ‘I can’t ask them to do it if I can’t do it.’ It’s very gratifying to accomplish so much with them every day.”

Thompson is most at home in the cab of the company’s John Deere 624K Loader. The Brandt-branded RTF200 comes equipped with a special forklift attachment capable of handling up to 13 608 kg (30,000 pounds) of payload, making it perfect for loading pallets of lumber onto trucks. “It’s powerful, smooth, and maneuverable in tight spaces.” The company also runs a 724K Loader with a.65-m³ (10 cubic yard) chip bucket and a 644K Loader with a log grapple.

To sort logs, the company uses a John Deere 2656G Log Loader. “The 2656G is a bit bigger and has a longer track than previous models, and is very stable,” says Thompson. “The operator loves the visibility, which is unbelievable.

“Our Deere machines do the job well and are absolutely reliable,” he adds. “And that’s what I need more than anything because if we can’t ship wood, we’re shut down. We’ve had almost no trouble, so I can safely predict what my costs are every month. That makes it easy to budget.”

Service and support from its local John Deere dealer, Brandt Tractor in Smithers, helps Seaton Forest Products stay up and running. “Brandt has been incredibly helpful. If I have any issues, I can call them, and they are out here just like that.”

Thompson is proud of the company’s business model and what he and Laing have built. “We’re cleaning up the forest, hiring First Nations workers, and trying to make a bit of money,” he says. “It’s win, win, win. I’m so proud of Kirsteen, who has been with me since day one, and our crew, who take pride in their work. Together with John Deere and the folks at Brandt, we have a great team.”

Upper Peninsula logger Paul Burton is fulfilling his father’s dream of taking the reins of the family company.