Anderson’s patent proficiency no walk in the park 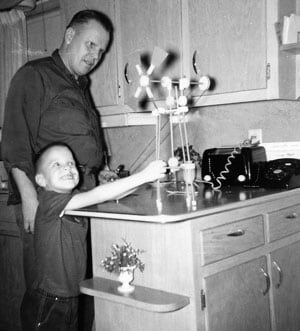 Always the inventor, Noel Anderson built a Tinker Toy windmill driven by an electric motor. “I eventually took apart the radio in this photo,” Anderson said, “and didn’t quite get it back together.”

Noel Anderson is digging. His small fingers stiffen becoming a tool, scraping and pushing pea gravel in his preschool parking lot. It is recess, a time when children run around and burn up energy. It's supposed to be a brief respite from learning, a chance to be goofy and play with friends. For Anderson, whose mind is rarely at rest, this is an educational opportunity.

A late spring rain has allowed a puddle to form. While some of his classmates may want to jump and splash in the murky water he's convinced them of a better plan. So, he digs. They dig. Fingers dirty, rocks piling up, they follow him and start to form pathways out from the puddle.

What Anderson leads his classmates into making is a canal system, one that is so extensive his teacher doesn't want it to go to waste. The next day she brings out translucent plastic tubing to be used to fortify some of the channels.

"It was the beginning of my civil engineering phase," he says wryly.

That phase had him building dams in his grandparents' farm creek. It was there he discovered the effects of flood surge and silting. He studied the interstate highway system, and Tinker Toys and an erector set helped prove stress design and pattern loadings. All this information sought out and consumed before the age of 10.

"Not only was I an only child, but I was an introvert," Anderson said. Without a sibling to bounce his ideas off, it left him to figure things out by himself.

"I had this sense of being alone as a child. I still have it to some extent today," he admitted. "I have great conversations with myself, mentally. I'll make hand gestures and everything."

That kind of behavior can get a person labeled as "quirky." It's a part of Anderson's personality that he fully embraces. "I think it's a strength," he said. "I discovered what would work and what wouldn't."

"I found I had this ability to make things," he said. "And, the appetite to learn didn't stop. There probably weren't many eighth graders attempting to discuss with their friends the three laws of thermal dynamics. But, I was and some of my friends had to listen to it." 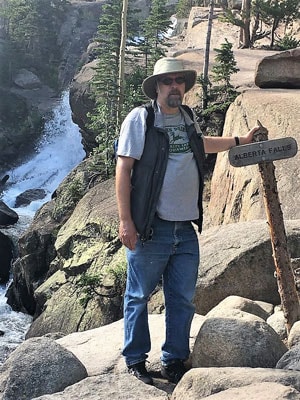 A typical Anderson family vacation involves quite a bit of hiking, including this trip to Rocky Mountain National Park, Colorado.

A mind in motion

What you'll find with Anderson is every discussion, action, reaction, and thought is measured. Although it feels prepared it doesn't take long to realize the word you're looking for is purposeful. Answers come quickly, in bunches. It is rare that his mind is not at the ready.

He remembers, it seems, everything. He is impressively present. When asked how his childhood differs from his own children's he doesn't tell you, he shows you. He describes what feels like a random scene that you'll later realize is part of the overall theme of his life.

"I'm shoveling our driveway. It's 1974 in Minnesota and the sky is so clear," he says. "I'm looking up and picking out Orion's Belt and Ursa Major and Canis Major. Olivia Newton John's "I Honestly Love You" is playing on my transistor radio."

Anderson has taken the simple chore of shoveling snow and used it to study the stars. His memory, he believes, was formed on a life built through learning, what he calls "a family value of education." His great grandfather came from Germany and eventually donated land for a one-room schoolhouse that he would help build.

"I started learning in preschool at age 3 and didn't formally stop until I got my PhD. So, I was in school for 25 years. I consider myself a life-long learner," he said. 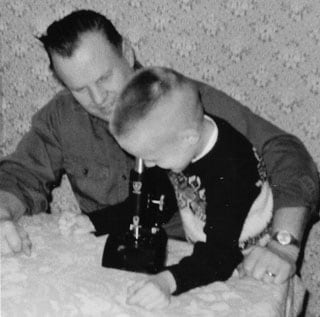 As a child Noel Anderson was given the choice of a pony or a microscope. “I chose the microscope,” he said.

Today, he consumes information any way he can, from podcasts to audio books to conversations with as diverse a group of friends as he can gather in Fargo, North Dakota. "I do listen to a lot of audio books," he said. "It is 30 or so a year. With the 2,500 miles I walk a year it makes it easier."

This last admission is said as an aside. There is no "look at me" in the sentence. He did say 2,500 miles a year, right?

Although Anderson has been a "lifestyle pedestrian" for most of his existence he became more "serious" about walking after he came up on the losing side of a vote concerning a family Christmas present in 2011.

Up for debate were a large-screen TV and a treadmill. "On Jan. 2 the treadmill arrived," Anderson said matter-of-factly.

When he noticed the treadmill had an odometer on it, well, that changed everything. "It was like keeping score," he said. And keep score he did.

If you ask him how missing a walk effects his mood, he turns his head to the side as if he doesn't understand the question. And he probably doesn't. You see, Anderson has gone for a walk for more than 1625 straight days. That's every day for nearly four-and-a-half years.

It starts by walking to and from work. And at lunch. Then sometimes later at night. During business trips. It will get you a reputation around town before you know it.

"My daughter was in a car with her friends and one of them saw me. 'That's the guy that walks all over town.' Lily had to admit 'yeah, that's my dad.'"

He doesn't refer to days of the week as Monday or Tuesday but instead as "the 9.4-mile day" or "the day I could only get in 4.7 miles because of work." Living in Fargo can present weather challenges, evidenced by an "inbound" (to work, 2 miles) walk in 33-degree below zero temperatures. His beard and eyebrows frosted over. It did prompt him to invest in ski goggles.

How else does Anderson rack up all those miles?

Noel Anderson describes himself as a lifelong learner. He still owns this set of World Book Encyclopedias shown in his bedroom as a high schooler.

Anderson, who relies on his ability to remember the past, is incredibly proficient in seeing the future as well.

As senior staff engineer for Advanced Technology at John Deere Electronic Solutions, Anderson utilizes his ability to bring diverse and emerging areas of technical expertise together into invention disclosures and patents. That talent protects Deere's intellectual property and provides the company with a distinctive competitive advantage.

He has 117 U.S. patents, the highest number for active Deere employees and among the top 5 all-time at Deere. When it comes to getting patents there are two thresholds, the novel and the non-obvious. Novel means you are not copying something that has already been done. Non-obvious is basic at face value. It means there's an applied standard that the invention was not obvious at the time of its creation.

Getting there, understanding Anderson's process, requires some explaining. Sorting through what's in his head is Step 1, he said. Step 2 is his ability to search well, to go on the internet and be able to focus on the missing elements and possible solutions to an idea. "I think I'm a better searcher than the average person," he said.

He now quotes famed inventor Louis Pasteur as he tries to explain what makes himself successful. "Serendipity favors the prepared mind."

It is fitting. Of course, he also offers this insight in to how his brain works: "Stuff jumps into it." And you believe it may be just that simple.

Can it all be frustrating, this exercise of communicating his vision? Anderson exhales audibly. "How do you explain to someone when you see something that someone has not seen before?" 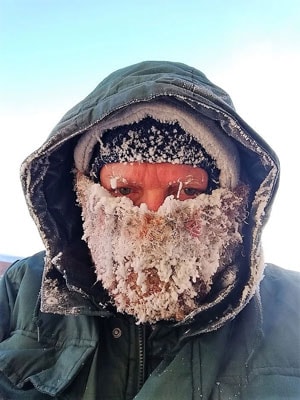 Noel Anderson’s love of walking does not take many days off. Living in Fargo, North Dakota, can be a challenge as evidenced by a walk to work when it was 33-degrees below zero.

Bringing it all together

He calls invention both a science and an art with many people having one, but not the other. He's run this formula for seemingly every aspect of his life: career goals, the Fellows Award, and his place at John Deere.

He has what he calls the 200/25,000/1 goal. It is two career objectives and one vocational. The 200 is the number of US patents he hopes to reach. This, of course, is calculated based on submission and acceptance rates and number of years left to work. The 25,000 is miles walked in the 4th quarter of his career. It means, he said, that he would have had a good work-life dynamic and good health.

"These two goals can be pursued in a very selfish sort of way but are kept in check by the 1," Anderson said.

The 1 is a "fullness element" which encompasses the career objectives. It is, he said, service to God, humanity, Deere, his co-workers, and others. That's the vocational objective that ties in to his personal callings of applied research and technology transfer. "It's about contributing to all those stakeholders."

Where does winning the Fellow Award fit in? "It's a secondary peak," Anderson said. "The 200 patents (goal) is the primary summit." He admits it took him a few weeks to study – yes, study – the reasons why he would have won a Fellow Award. He felt as if he didn't meet the criteria initially.

"I had to push it away and study it from a distance," he said. "I finally came to understand and accept how I was qualified. It is a great honor."

That recognition reinforces his commitment to Deere. He is, after all, the kind of talent that has many suitors.

"What keeps me at Deere? Habit," he says dryly. "It's working well. I've got relationships and support here. And," now he pauses, "if I went anywhere else I'd have to work against my existing patent portfolio."

And even he may not have a quick answer on how to do that.