Kremmer values the mess that comes with creativity 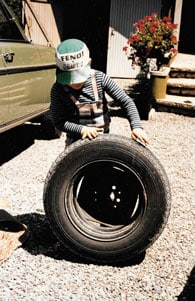 As a young boy Martin Kremmer showed his support for both of his parents' employers.

Martin Kremmer stands in the middle of his father's workshop amazed. He's been in this spot dozens of times, but the feeling rarely changes.

Screwdrivers are lined up by color and size. Hammers cradle on nails, one next to the other. There are saws and vices. On the back wall drawn outlines show where every tool is or where it should be. To the left, cupboards hang. To the right, long shelves hold nuts and bolts and other hardware, all separated into boxes, many rescued from his father's willingness to disassemble no longer needed objects.

Below the thick workbench are stacks of wood, odds and ends, and misfit pieces of potential. Scraps of metal are piled alongside.

It is from this tiny room located in the cellar of an unassuming home in Hohentengen, Germany, that Kremmer would learn the value of making messes.

For him the mess symbolizes what naturally accumulates when pushing forward. And, it's a lesson taught to him by family, first through a strong values system from his parents, and by watching his uncle drive toward success at his ag equipment dealership.

It could easily be said that not only did Kremmer make a variety of things in the workshop, but the workshop made him. Martin Kremmer has been around tractors – both big and small – for most of his life.

With his father gone most of the week traveling for work and his mother busy at the dealership, Kremmer and his two older sisters learned independence and a sense of adventure early on. Hohentengen was a picture postcard village of 2,000 in southern Germany. Roaming the village with classmates was common.

"It's what a lot of kids did. We were outside kids. Always outside," Kremmer said. "We didn't have the electronics of today's kids. We had treehouses and a backyard. And, we had good friends."

For nearly four decades Kremmer has stayed in close contact with those friends. A group of them meet at least once a year and take a trip together.

"I grew up in a house with high values," Kremmer said. "When you mention values that's a pretty important one there – counting on people. It's who you are surrounded with and who you can count on and how they can count on you."

Kremmer took this lesson from early childhood into adolescence. Hohentengen has a yearly carnival – Fastnacht – with a parade on the Sunday before Ash Wednesday. It is a centuries old tradition that incorporates food, costumes, and is highlighted by the parade where residents line the streets and celebrate both history and creativity.

Kremmer took part in the parade twice. The first in 1986 at the age of 13. He and his friends used his father's workshop to make a "carnival wagon" in recognition of Germany's 100th anniversary of the automobile. It had wooden wheels, a silver metal cover on top, a cylinder used for braking, and half of a bicycle on the back. The finishing touch was the Mercedes Benz silver star logo on the front.

"I would use whatever I could find in my father's workshop. I would just try all sorts of crazy things. He was gone all week," Kremmer says. "He came home one Friday and, well, the tools were not where they were supposed to be." He pauses at the memory and smiles. "It wasn't the first time."

Some messes you never forget. 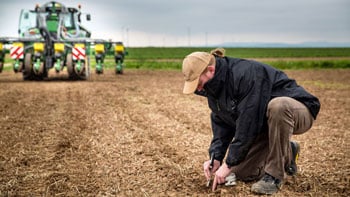 Kremmer helped bring the 1725 Deere high-speed planter to the European market. Here he checks seed spacing and depth during testing.

Ask Kremmer if he was a serious kid growing up – there were projects and jobs that warrant the question – and he leans back and repeats the words over and over like he's tasting a sauce to see if the flavor is just right.

"Serious kid. Serious kid," he says. It's not that he doesn't understand, it's as if he's almost surprised he's being asked. "Well, of course. Working at the dealership was my No. 1 priority at the time," he says with conviction. "I wanted to make sure it was going in the right direction."

Kremmer's sense of purpose – taking care of customers – was developed by his father who worked as an engineer for Fendt and his mother who started at the Deutz-Fahr dealership (then Claas) at age 14. She would retire 67 years later at the age of 81. Today, those two companies are two of John Deere's biggest competitors in the European market. "Going to work for John Deere was probably the most politically correct move I could make without ruining family relationships," Kremmer said with a laugh.

By the time Kremmer was 15 he was working at the dealership with his uncle. During a school break he spent two weeks as a mechanic assisting field technicians. The stress did not suit him, and he told himself this was not the career path to follow.

"Then, on my last day my uncle came up to me and said: 'Why don't you come by every Saturday now and help clear up the shop, make weekend repairs?' And either I wasn't quick enough or not brave enough to say no, so I was in," Kremmer said.

It is with admiration that Kremmer talks about his uncle's ability to make decisions and assemble a team of employees that shared his vision. "He had a very charismatic personality," he said. "He could talk you into almost anything."

He loved his time at the dealership dealing with customers, assisting colleagues, and working on a lot of heavy agricultural machinery.

"In the year I finished school I also had put in more than a thousand hours there," he said. "I was there in the evenings, weekends, on summer break. I was there all the time."

It was an easy decision to pursue an agricultural engineering degree. A master's degree and doctorate followed. And so did the mess. 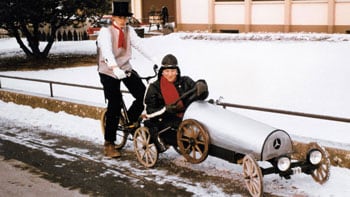 The annual Hohentengen, Germany, carnival Fastnacht was highlighted by a parade. Kremmer, in the driver's seat, and friends built a vehicle for the parade from pieces found in his father's workshop.

At the University of Newcastle in northeast England, Kremmer had already faced challenges with his research funding for the 3D modeling of industrial granular flows project. "I was given two years of funding for a three-and-a-half-year project," he said. Soon that shortfall would go from bad to worse.

"Three weeks after relocating to the UK, my funding was canceled for one additional year," Kremmer said. "I was like, you've got to be kidding, right?"

During his PhD research, Kremmer met Dr. Carol Plouffe, a 2016 John Deere Fellow Award winner at a conference. The work got Plouffe's attention and brought the two Fellow winners together.

"The journey was not straight at all," Kremmer said. "You just have to keep moving on. It gives you an entry door when you don't see one. In this case it was with Carol and Deere at the John Deere Tech Center in Moline."

A Fellows Award doesn't just happen however. Kremmer's resume is plenty glossy with two Agritechnica silver medals and a gold from the SIMA Fair for his work on planters and tractors. His ability to lead teams and redraw boundaries is unique. And, it could be said, those traits were formed at an early age.

"There was this dynamic growing up," he explained. "We were independent as children, but we also counted on each other. I'm always looking for that. You have to be positive and have this energy to keep moving forward. And, sometimes, you have to be able to live through the pain of being a perfectionist."

If Kremmer doesn't have the mess figured out, he's getting close. As director of the European Technology and Innovation Center much of his work now is getting groups of people to pull in the same direction and to be ready for when the rope breaks.

"I like taking the energy to push things to the edge, and even over the edge," Kremmer said. "And, I'll take the crowd with me. I love it when it gets too messy. I'll swim out. I think I've learned this over time. Take the deep breath and swim underneath and find the air again. I wouldn't be more comfortable if I were more under control. This is what drives me." 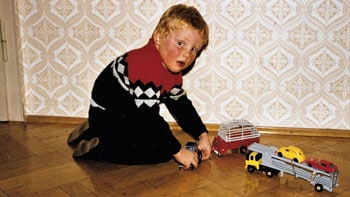 From a very young age Kremmer was drawn to trucks and tractors.

Where to from here?

If you think someone like Kremmer has it all figured out he'd be the first to say he's not even close. He talks openly about doubts and failed hypotheses.

"The perfectionist in me keeps trying," he said. "And this inspires for creating new things, often from existing elements -- like in my father's workshop -- and trying out the hypotheses instead of letting things go."

Where Kremmer has no doubt is in his fit with John Deere.

Does any of that comfort change with the Fellow Award?

"The day I learned of the announcement I was like, OK the journey starts," he said. "I have a responsibility now. I would be disappointed in myself that if in a year or two I had not met the expectations I have for myself as a Fellow."

What does it mean? Kremmer equated the honor to another passion of his, likening it to rehearsing with a choir and an orchestra for the next big concert. There is work required to make the music sound best.

Those that know him can attest to this: That music will be loud. And it just might be messy.