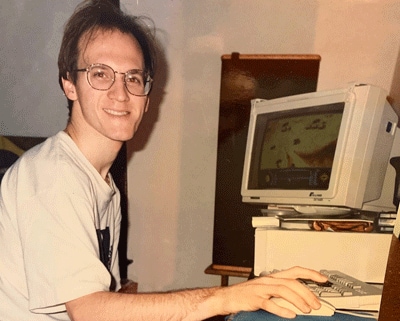 Early exposure to a home computer allowed Adrian Rantilla to learn about simulations and capability building.

At 10, Adrian Rantilla was like most kids his age. He first learned about business through a lemonade stand. By running thousands of them a day, every day, for weeks on end he mastered cost analysis and advertising. He then moved on to buying and selling guns and opium while fighting off pirates and repairing a fleet of ships as he navigated the unforgiving waters of the South China Sea.

On second thought, Adrian Rantilla was not like most kids his age. As a matter of fact, in 1979 there were no kids doing what he was doing. He was an outlier in the most contemporary use of the term.

It probably makes more sense to compare him to Bill Gates. Or the Beatles.

If you are familiar with Malcolm Gladwell – author of the book Outliers – then you've heard of the 10,000-hour theory. In the book, Gladwell shares the belief that you can become an expert at something by logging 10,000 hours of practice or exposure. It's that second word – exposure – that is the key. You can't master violin without first getting the violin.

Gladwell had two famous examples. Gates' access to a computer lab as a child was the first. The Beatles were the second. The band spent countless hours playing in bars throughout Germany long before they appeared on the Ed Sullivan Show. And, Rantilla? His father was such an early adopter of technology in the 1970s that the family had multiple home computers before anyone knew what a home computer was.

Rantilla would use his hours on strategy games (Lemonade Stand and Taipan!) and eventually learn to write code "when there wasn't code." His head start into this world allowed him to lap his peers in elementary school, high school, and all through college.

This knowledge base made him a desirable student for post-graduate programs. It earned him a fellowship at the University of Illinois and freed him from the worries of part-time work. While his colleagues had to take heavy teaching or research assistant loads, Rantilla widened his lead over his classmates by conducting thousands of studies, going to conferences to present his work, and getting published.

One of those research findings in social psychology was so interesting it was referenced in a 2008 book. By Malcom Gladwell. In his bestseller Outliers. Page 174.

Rantilla was born into a culturally diverse family, his father, Richard, from Ohio and his mother, Cylene, from Brazil. His parents met in college while getting their master's degrees and would eventually marry. When Cylene became pregnant the family moved to her native Sao Paulo.

Memories of the Brazilian culture – family-centric, social, great food, and "soccer, soccer, soccer" – were engrained in Adrian. These interests would eventually lead him to the field of social psychology, the study of the individual within the context of a group or nation.

Shortly before Adrian turned 7, his father, who had been working for General Motors in Brazil, accepted a job in Michigan with GM. Assimilating into the new environment was made easier with his mother's outgoing personality.

"My mom owned all the social relationships," he said. Rantilla said he relates to his mother because of her connection to people. "She taught me that the world doesn't just work because of engineering principles. It works because of social principles, too," he said.

Adrian Rantilla and his younger brother, Michael, were born in Brazil experiencing the country’s rich culture.

He used them to answer questions, run simulations, and, in a mountain of foreshadowing, build capabilities for whatever fantasy business he was running. He quickly discovered it was much better to get information from many, diverse sources than just one.

At the center of it all was an Apple II computer with its less-than-dramatic green screen serving as a portal to the future. If you walked through the Rantillas' East Lansing home, you would quickly find that the main floor guest room had been then transformed into a computer lab of sorts. Music would be playing. Foot traffic would enter in and out. The lone window in the room provided enough daylight to combat the impact of the classic speckled brown shag carpeting. And, sitting at the desk in his favorite black "spinny chair" would be Adrian, focused on the challenge in front of him.

"These games I played showed me how behaviors and other factors would influence decisions – my decisions – and what the results of that would be," Rantilla said. "It fascinated me. I wanted to master it."

In high school he was introduced to his first social psychology experience – himself. His circle of friends was more of a line stretching to the horizon. He wasn't interested in being confined to one clique and spent his time with as many groups as possible.

"Why wouldn't I want to be around the most interesting people as often as I could," he asked. "If nothing exciting was happening here I would go over there."

By age 7 Adrian Rantilla had left the warm climate of Brazil and moved to Michigan. “It was an exciting shock,” he said.

At the University of Michigan his computer background brought in a new group. "I got involved in, I guess you'd call them, hacker communities. Folks that were writing code for online games," Rantilla recalled.

He dabbled in a lot of areas – sociology, anthropology, computer science, physics, economics -- and then, in 1990, came up with a bold plan: He would build his own major in the honors program around artificial intelligence. The recipe contained computer science, philosophy, programming, ethics, and psychology.

Rantilla quickly learned a lighthouse can't show you every rock.

"It turned out to be too much of a bureaucratic nightmare," he said. "I was working through advisers and department heads. It just wasn't getting anywhere."

He ended up finding social psychology, which gave him the perfect blend of cultures (sociology) and clinical work (study of an individual brain). Rantilla was interested in the study of how people made decisions and how they made attributions for outcomes. For example, what factors would influence customers at a lemonade stand -- or at an equipment dealership.

"My job at Deere, my job wherever I've been, is to ask questions," he said. "People think we provide answers. We don't. We provide the right questions."

They also provide opportunities, something Rantilla has been quick to seize in his personal life.

At Illinois he was in a professor's office when a strange stack of yellow papers tugged at his curiosity. They were inquiries from head hunters, agencies looking to match employer with employee.

Rantilla was ready to embark on a career in academia, having sent out "hundreds" of resumes to universities across the country. But he couldn't unsee those piles of opportunity.

The next thing he knew he was working for a consultancy in Chicago, put in front of clients wanting information on brand equity. His colleagues were a mix of social psychologists and advertising executives.

"It was the blending of the art and the science of human behavior," he said. Rantilla was enchanted.

The agency was eventually sold to McKinsey & Company, a worldwide management consulting firm. It was the big leagues. In 2000 Rantilla was sent to help "some tractor company." He laughs and says, "What did I know about farming? Food comes from grocery stores, right?"

The project was to figure out if John Deere should sell its branded riding lawn mowers in The Home Depot stores. Deere was so impressed with the analytics and structural equation modeling Rantilla provided they offered him a job. "Deere didn't have anything like this at the time and they wanted to build it into their consumer function," he said.

He continues to work horizontally, using what he learned to be effective in high school and applying it to corporate America.

"Silos can be crazy things," he said. "I always think to myself, 'Why would I want to run just one simulation when I can run 50?' It's a more efficient way to share information."

Brazilian culture included many things, most notably and obsession for soccer, which Adrian Rantilla played all through school in East Lansing, Michigan.

A lesson learned on a dairy farm

A breakthrough moment came on a bitterly cold day in February 2006. Rantilla was visiting a Wisconsin dairy farmer who was proud to show off his operation -- cows, grain bins, feed system, and key equipment.

"He walks over and puts his hand on the hood of a competitor's skid loader," Rantilla recalls. "This right here, he tells me, this is the single most important piece of equipment on my whole farm."

Rantilla took video of the encounter and delivered it along with analysis of the markets, customer needs, and potential opportunity.

Deere's silos, Rantilla said, made it so you couldn't buy a skid loader at an agricultural dealership or a Gator at a construction dealership. "We had to start putting products in places where customers wanted to buy them, not just where we wanted to sell them," he added.

It took more than a decade to turn that corner, he said, which leads to his next challenge: How does John Deere, with its risk-avoiding and conservative behaviors, embrace the level of innovation that is going to be required to be successful in the future?

Rantilla describes it as "the classic dilemma of the market leader asking, 'Why would I possibly cannibalize this profitable business?'"

Getting to that answer will keep Rantilla on a familiar path – asking the who, what, when, where, and why around all that Deere is trying to accomplish. It's what he does. He churns focus groups and market analysis and studies human behavior and motivations. He is the "why" personified.

When asked what it means to be a Fellow Award winner the room gets surprisingly quiet. For nearly two hours Rantilla has quickly offered insights, stories, and conviction on a variety of topics. And now? Silence.

Then Rantilla delivers. "To me there is an aggregate level of responsibility as a representative of the brand and being excellent at a craft. A responsibility to give more, to continue to develop in that space. In my case, a deeper understanding of customers, markets, and competitors."

The answer shows Rantilla followed his father's advice. "He always told me, 'Make sure you do what you love.'"

When it comes to taking what was loved as a child and turning it into an accomplished career, never has a line been drawn so straight -- even if you had to be an outlier to draw it.