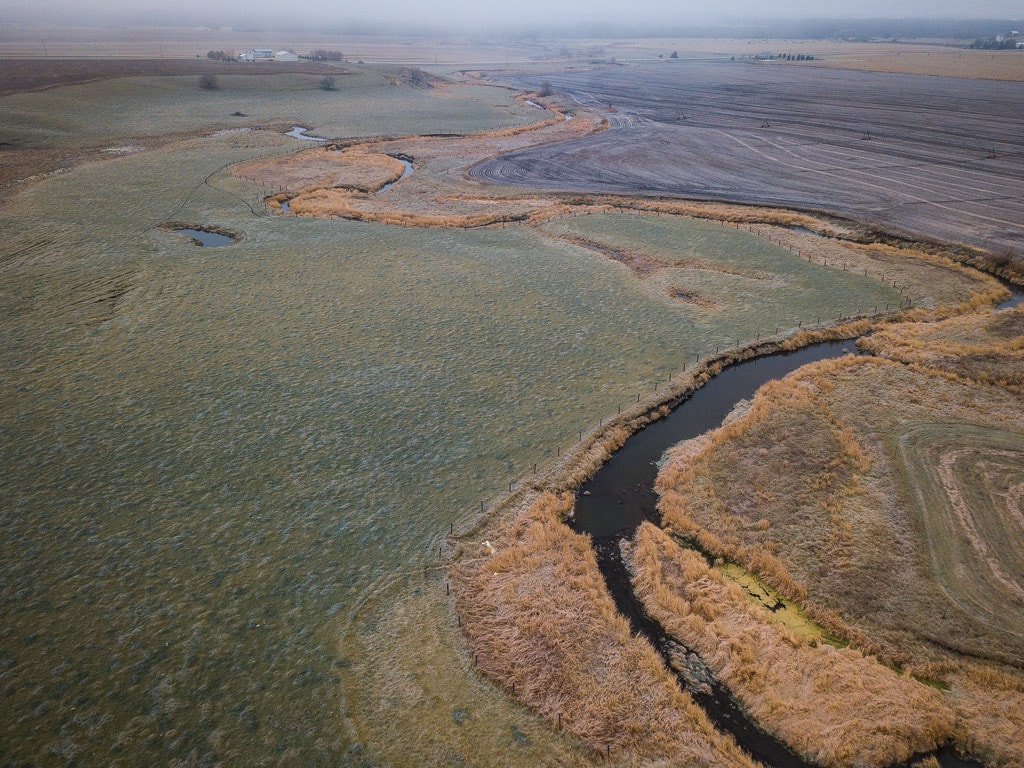 The Topeka shiner is a little fish but it has a big story to tell. That story is how fish enthusiasts and farmers are working together to build habitat for this endangered species—and, in that process, are spawning ecological services that help downstream neighbors.

The story begins with oxbows. As a stream meanders through its floodplain, some loops get cut off to form an oxbow. They play an important role in a wetlands ecosystem, but many have been filled with sediment as soil eroded from nearby fields. Removing that silt restores the oxbow habitat.

This restored habitat provides a boost for Topeka shiner and other fish species, but farmers see other benefits as well. Ray Frye worked with the Iowa Soybean Association and The Nature Conservancy to restore an oxbow on White Fox Creek, and it has been extensively studied by scientists since going onstream in 2012. Frye feeds water from a pair of tile lines into one section of the oxbow. Scientists find that bioactivity in the oxbow removes about half of the nitrates, on average, throughout the year. In dry times, when water stays in the oxbow for 25 days or more, nearly all incoming nitrates are removed.

Oxbows are now an approved practice under the Iowa Nutrient Reduction Strategy, the plan to reduce nutrient loads leaving via the state’s streams. Frye thinks restored oxbows deserve to be considered an important edge-of-field tool alongside more complex—and costly—tools such as bioreactors and saturated buffers.

“The stream provides the management, backing water into the oxbow when flow is high, and cutting off the oxbow when the creek goes back down,” he says. “The oxbow is good for the fish, and it also improves the quality of the water that leaves our land and ends up in the Gulf of Mexico.”

Corey McKinney, a conservationist with the Iowa Soybean Association, points out that oxbows rarely take any land out of production, since they exist in seasonally wet, unproductive areas. “We’re not creating new oxbows,” he says. “We are restoring them where they naturally occur.”

Most restored oxbows are neither large nor deep; typically, about four to six feet of sediment is removed to reveal the old streambed, with this rich soil returned to crop fields. And the average restored oxbow is about a half-acre in size, completed for a cost of about $10,000. Funding is available from a variety of sources, including USDA’s EQIP, and often covers 100% of the cost.

An oxbow may be small, but it can provide a big boost to the Topeka shiner population. “More than half of our restorations in the Boone River watershed have healthy populations of Topeka shiner in them,” says Karen Wilke, Boone River project director for The Nature Conservancy. “We recently found Topeka shiners in a subwatershed where the species had not been seen for 36 years.”

Restored oxbows, though small, can harbor thousands of fish. Karen Wilke and Corey McKinney seek areas within a watershed where habitat can be enhanced.

Fish story. The U.S. Fish and Wildlife Service pioneered oxbow work in Iowa, and look to build on the successful teamwork between fishers and farmers. “Our biggest project has been the Topeka shiner work on the Boone River,” says Heidi Keuler, coordinator of the Fishers and Farmers Partnership. The partnership recently marked its 10th anniversary.

“We connect across boundaries to fund projects that benefit farms, fish, and the Mississippi River,” Keuler says. A visit to the partnership’s fishersandfarmers.org website shows the variety of projects underway across the country under the umbrella of the National Fish Habitat Partnership.

“We often use the Topeka shiner project as an example of what can be accomplished when people work together,” Keuler adds. “It helps us build excitement for our farmer-driven soil health and watershed initiatives to foster fish habitat. It’s a great story.”