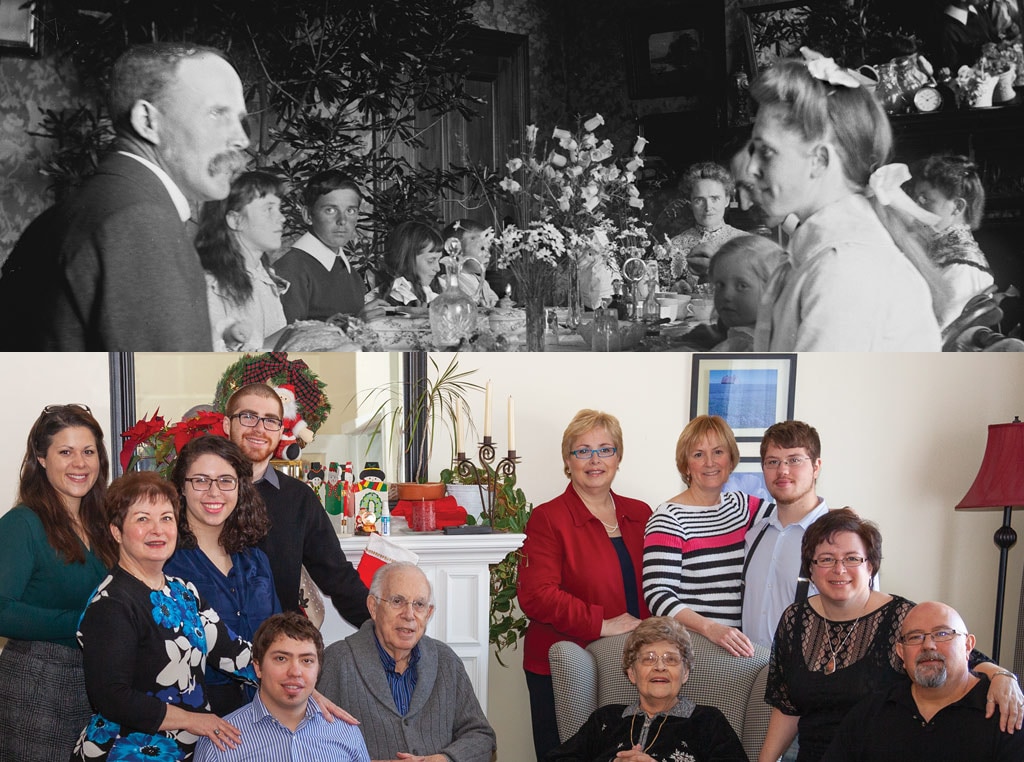 Above. Families and friends have gathered together to celebrate Christmas since the Middle Ages. In the last two centuries alone the foods an average family would have on the menu have changed remarkably.

Holiday traditions aren’t quite as timeless as we think.

Holiday meal traditions and customs seem timeless. But in reality, meals served in most households evolved over time. Technological advances, rising affluence, and shifting palates have changed what we eat. My 97-year-old mother, Eleanor McClinton, recalls her family’s Christmas meals in Southwest Saskatchewan during the 1930s Dust Bowl.

“Our meal would be roasted turkey or chicken with sage-seasoned bread stuffing; mashed potatoes and gravy; mashed turnips or carrots; home canned peas; cabbage salad; homemade beet or cucumber pickles and homemade buns (rolls) or bread. Dessert was a suet pudding made from raisins, peel, apples, carrots, other available fruits and vegetables, and suet. All were steamed or boiled together in a bag for three hours and then served with lemon sauce.

“Beverages were tea, water or milk; there was no fruit punch, cranberries or fresh vegetables,” she added. The older children helped prepare the meal.

Signs of Christmas. For most of the 20th century two events heralded that Christmas was coming to young Canadians growing up in rural Western Canada. The first was the arrival of the Eaton’s and Simpson-Sears Christmas Catalogues in November (check out www.wishbookweb.com for a trip down memory lane). The second was the arrival of wooden boxes of Japanese Mandarin (Satsuma) oranges in grocery stores. 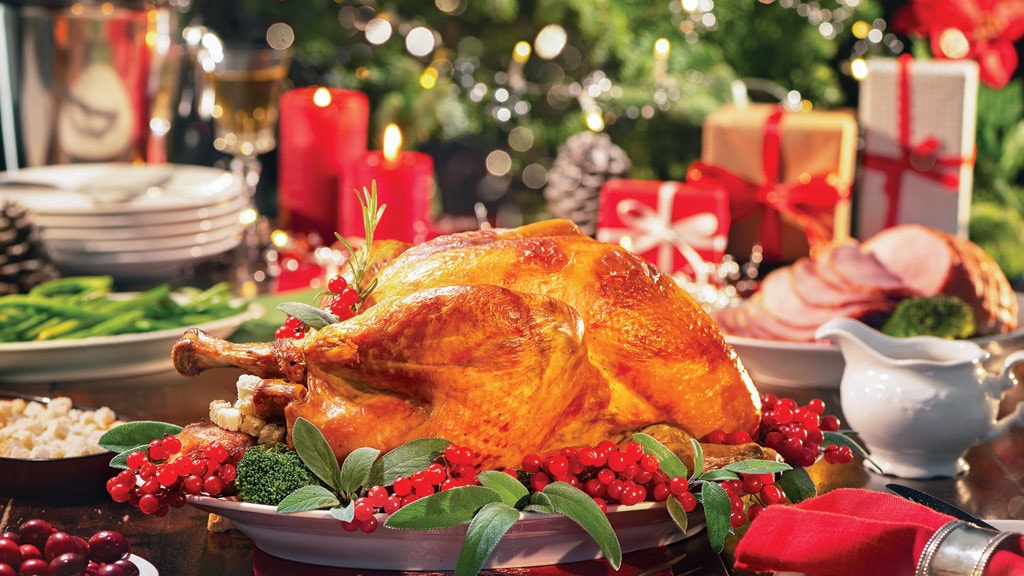 Turkey was an exotic luxury in 1526 when King Henry VIII became one of the first in the English-speaking world to have turkey for Christmas. 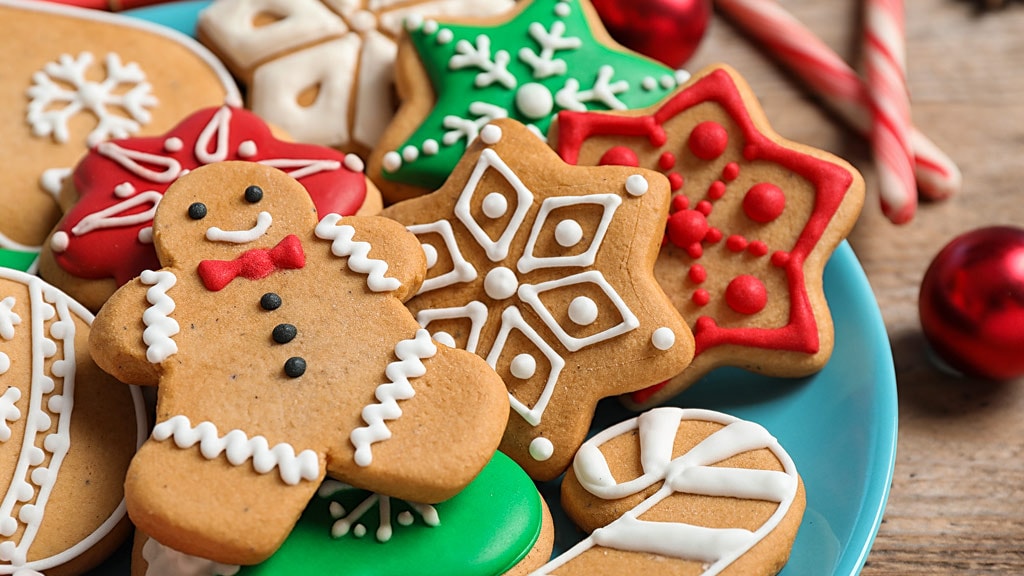 Gingerbread men date back to the reign of Elizabeth I.

They showed up on the first days of December and were gone by New Years. It’s hard to even imagine such seasonality today.

Orange luxuries. “Years ago, any orange was just a total luxury,” says Dr. William Woys Weaver, a Devon, Pennsylvania, based food historian and author. “My grandmother was born here in Chester County, Pennsylvania, in a Quaker family in 1900. She told me that each child got an orange at Christmas time. It was the highlight of Christmas.”

Christmas was treated as more of a solemn religious event, Dr. Weaver says. People went to church services and then came home and had a big dinner. It wasn’t celebrated at all in New England, where the Puritans and the Quakers held sway, until the mid-19th century.

Today it’s become a non-denominational celebration of hospitality, Dr. Weaver says. Even the dinner has changed as people color their menus with ethnic dishes, adding Latino, Thai dishes or whatever. Christmas dinner has become quite the collage of culinary customs.

“In a sense, the American Christmas became germanicized,” Dr. Weaver says. “Christmas is a very big thing in German culture and of course they gave us the Christmas tree. Once you have a Christmas tree, you’ve got to decorate it. This is where the idea of decorating it with food, cookies and things, came into play.” 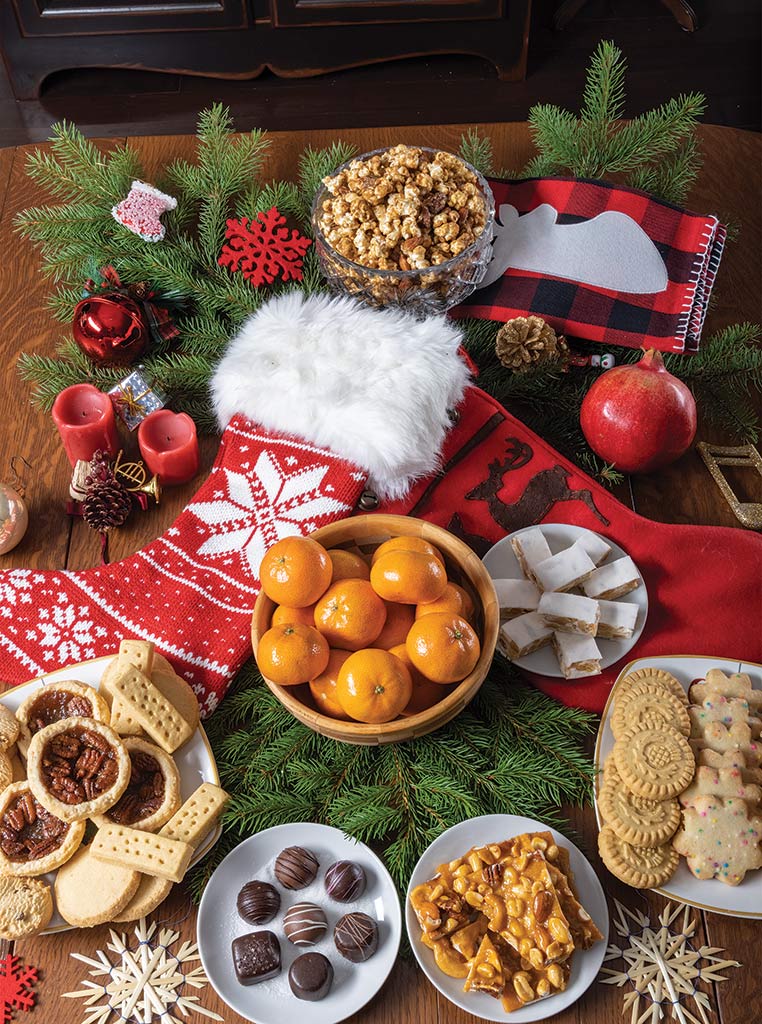 Cast iron stoves and baking powder made it possible to easily bake cakes and cookies at home. Oranges were luxuries.

Technology started changing American and Canadian diets around 1800. Canning, preserving food in glass jars with steel lids and rubber seals, dates to the Civil War. It wasn’t until Louis Pasteur’s work in 1862 that people knew why it worked.

“The cast iron stove brought the Industrial Revolution to the kitchen in the 1790s and then baking powder came along in the 1840s,” Dr. Weaver says. “The next big shift came in the 1890s when the U.S. took over Cuba and became a colonial power. We had this extraordinary flood of cheap sugar and made a lot of these celebration foods less expensive. Then the poultry industry became industrialized in the teens and 20s and the cost of eggs, chickens and turkeys went down. The working class, who could only afford chicken on Sundays, could afford turkey for Thanksgiving and Christmas.”

Transportation advances, especially the railways, made a huge difference in the availability and the affordability of the foods. The arrival of the home refrigerator in the 1920s revolutionized how people prepared and stored meals for their feast.

The Christmas meal has always varied dramatically by location and culture. As the world gets smaller, food trends are mixing and matching in sometimes surprising ways. For example, Kentucky Fried Chicken is the most popular Christmas food in Japan.

Turkey became the king of the Christmas table in much of the English-speaking world, thanks to King Henry the VIII and the novelist Charles Dickens. King Henry was one of the first to swap goose for turkey in 1526. One of the most famous portraits of the monarch has him clutching a turkey leg.

Scrooge cemented the bird’s position as the fowl of choice 320 years later when he sent a large turkey to Bob Cratchet to replace the family’s small goose in the climactic scene of Charles Dickens book, A Christmas Carol. The roast goose didn’t start to regain favor for decades.

A modern observer would quickly notice that fresh vegetables were conspicuously absent from Christmas tables. Only cabbage dishes and root vegetables, like parsnips, carrots, and potatoes, would be on the menu until well into the 20th century.

Tastes change. Recipes have really changed over time too,” Dr. Weaver says. “I made a mincemeat pie recipe from 18th century Philadelphia that contained loads of beef tallow. It was like eating soap. I couldn’t stand the mouth feel, it was like eating paraffin.”

“It’s important to note that we lived very differently in the 19th century,” Dr. Weaver says. “We lived with our extended families, so the house was always full of people. All the old grannies and great aunts made jobs like plucking geese fun. After finishing, they’d have tea or cookies.”

Affluence also had a dramatic impact on the Christmas feast. The wealthy’s meals featured turkey, ham, and mountains of pastries and sweets of all kinds. But the vast majority lived in abject poverty by modern standards. Out in the countryside Christmas was a time to make a profit, Dr. Weaver explains in his book, The Christmas Cook. Farmers sold their geese or hogs to make money. They would bag a wild turkey, wild ducks, or songbirds for their meal. A roast ground hog might be a good substitute for a suckling pig.

In the early 19th century, sweets might be a poor man’s pound cake made from leftover bread, or homemade ice cream made with snow, Dr. Weaver says. In the south, slaves and poor white families would celebrate with Johnny Cakes, a hand-rolled pastry made from butter, brown sugar, eggs, flour, corn meal and nutmeg that’s baked on a board over an open fire.

There was a huge disparity between the foods the rich and the poor ate for their Christmas dinner.

Even over the course of my life there have been big changes. More so if you extended the time period to include my children, stepchildren and in-laws.

The Christmas menu is constantly changing. There’s a lot of fusion going on as the population of Canada and the U.S. diversifies. Future dinners are going to feature a lot more Latino and Asian dishes. But that doesn’t mean that the classics have disappeared forever.

“We go through phases where we drop a lot of these traditional dishes before long, no one has a grandmother to tell them how to make them anymore,” Dr. Weaver says. “Then, people like me and my books become a stand-in and we undergo a revival. Here in Pennsylvania, high-end chefs are putting our traditional and regional foods on their menus. Part of it is these foods are comfort foods, they make people feel good and provide much needed hugs.” ‡

Christmas used to be a solemn religious occasion in many parts of the United States. But Christmas became “germanicized.” German traditions like Christmas trees and decorations to delight children spread across the entire country. 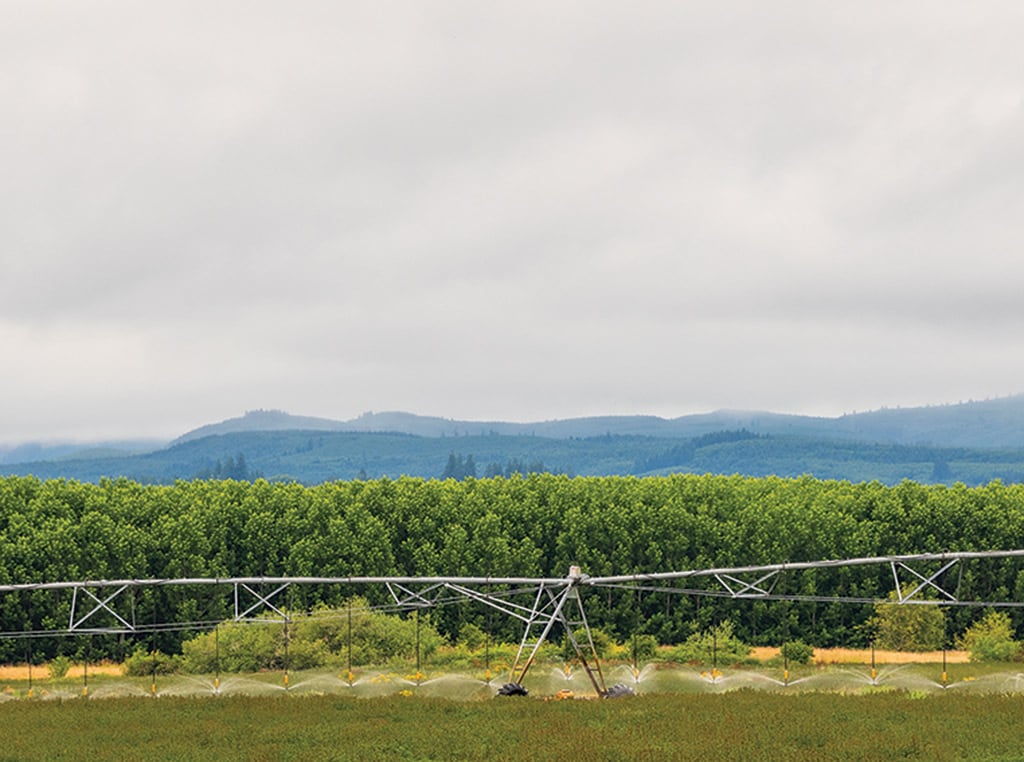 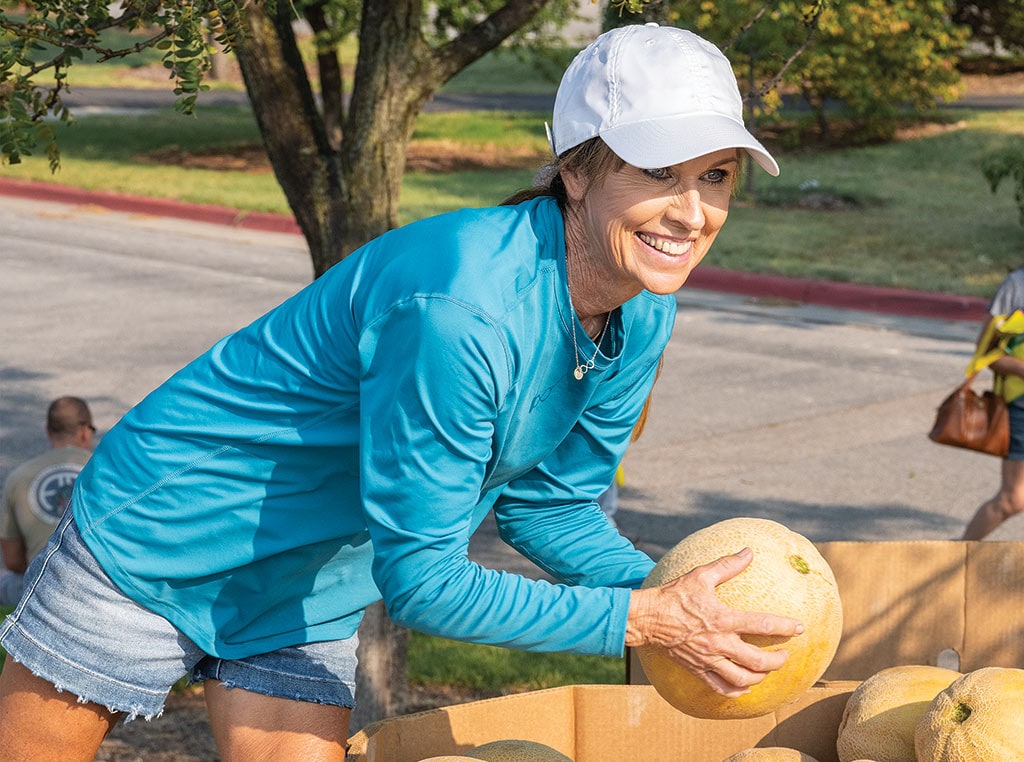