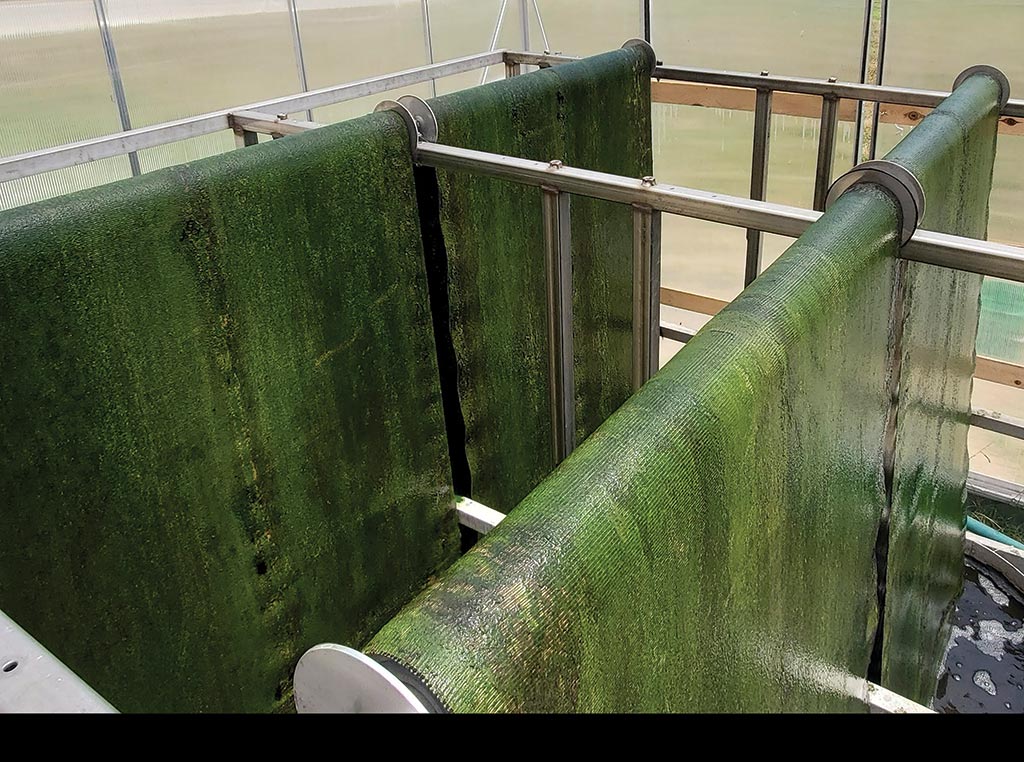 Above. Algae flourish in a biofilm on a belt in a commercial system.

A ‘green’ solution to cleaning wastewater.

If you kept up on the news through the summer of 2021, you might think of algae as an environmental menace. Across the U.S., harmful algae blooms put a stop to fishing and swimming in lakes and streams, and even threatened drinking water.

But that’s only one side of the story. Algae—the name for a whole array of aquatic organisms ranging from cyanobacteria to microalgae to macroalgae such as seaweeds—can do a world of good. Research has already shown that algae can produce livestock feed, fuel, fertilizer, and food; it can be used to make bioplastics; and, as a biostimulant, it can help to restore degraded soils. The Algae Biomass Organization describes algae as “the most efficient organism on the planet” for turning sunlight, nutrients, and carbon dioxide into biomass. The organization suggests that algae is poised to become the miracle crop of the new millennium.

Clean green. When nutrients such as nitrogen and phosphorus enter natural waterways, algae flourish as they consume and remove these nutrients. “Algae is nature’s way of treating nutrients,” says Martin Gross, chief executive of Gross-Wen Technologies. “We simply industrialize the process.” GWT is a next-generation wastewater treatment company that puts microalgae to work, resulting in a sustainable and efficient alternative to conventional water treatment methods.

Gross was working on his doctorate in engineering at Iowa State University under professor Zhiyou Wen when the idea for a Revolving Algal Biofilm (RAB) system was born. Algae hitch a ride on a continous belt system—much like a treadmill pointed straight up—alternately exposing algae to nutrient-rich wastewater, followed by a period where the organisms are exposed to sunlight and carbon dioxide in the air.

Above. Revolving Algal Biofilm setup treats wastewater at the rural town of Slater, Iowa. Martin Gross worked with algae as a student at Iowa State University and now heads up Gross-Wen Technologies, putting algae to work in sustainable treatment systems.

“Our big advantage is in the ease of harvest of the algae,” Gross says. Harvesting the algae is a simple, automated process, as a scraper simply removes the thick, green paste from the belt.

GWT is based in Slater, Iowa, a small town that began installing a large-scale algae system in 2021. GWT has more than a dozen wastewater projects underway, from small rural towns to a wastewater site serving Chicago.

Carbon capture is another key feature of the GWT system. Algae consume carbon dioxide as the colony builds its biomass. As a result, two tons of carbon is sequestered from the atmosphere for every ton of algae harvested.

That fact has spurred interest in another application for the algae system: enhancing the carbon intensity score when integrated with a dairy or swine operation that treats its manure in an anaerobic digester to produce renewable natural gas (RNG).

A carbon intensity impact analysis found that using the RAB system reduced volatile solids, and thus methane emissions, from the digester effluent. That, coupled with carbon capture from the harvest of algae, improved the carbon intensity score (and the corresponding value) of RNG produced by the digester.

The study found that a 5,000-cow dairy in Wisconsin could see increased revenue of $490,000 a year; a California dairy could see up to $1,083,000 annually due to the increased value of the RNG. These carbon intensity values are the result of a series of complex calculations, but the message is simple. When it comes to sustainability, algae provide the greenest of green solutions.

Food for thought. GWT buys algae back from its RAB users, converting the algae to a slow-release fertilizer. Recent studies by the USDA’s Agricultural Research Service show that algae also can help build Corn Belt soils when used as a biostimulant, providing a “glue” that improves soil aggregation.

GWT’s Gross believes that using algae may someday play an important role in providing human food. “I continue to be amazed at what algae can do,” he says. “Some species can produce 75% protein. Algae might just be the crop of the future.” ‡ 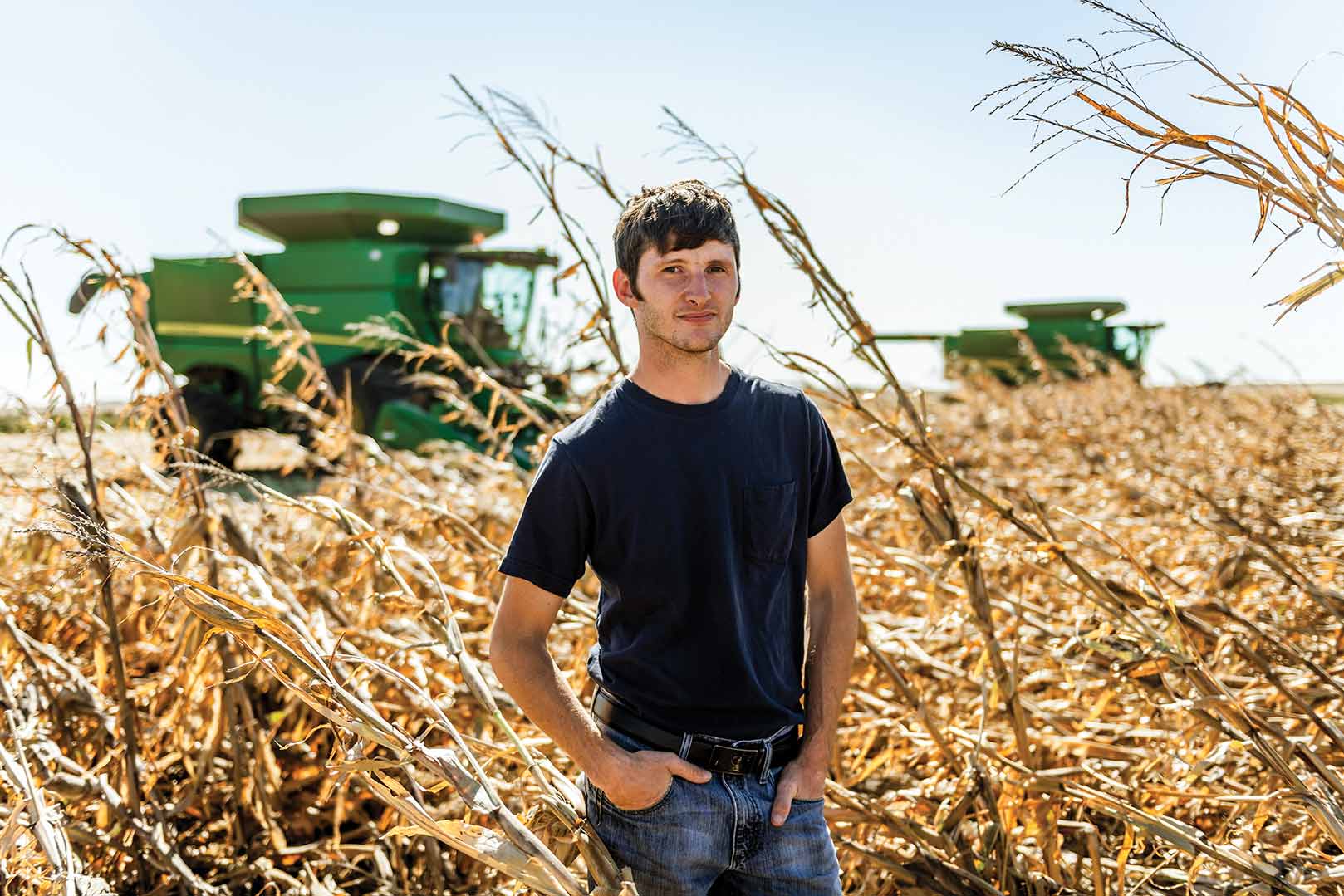 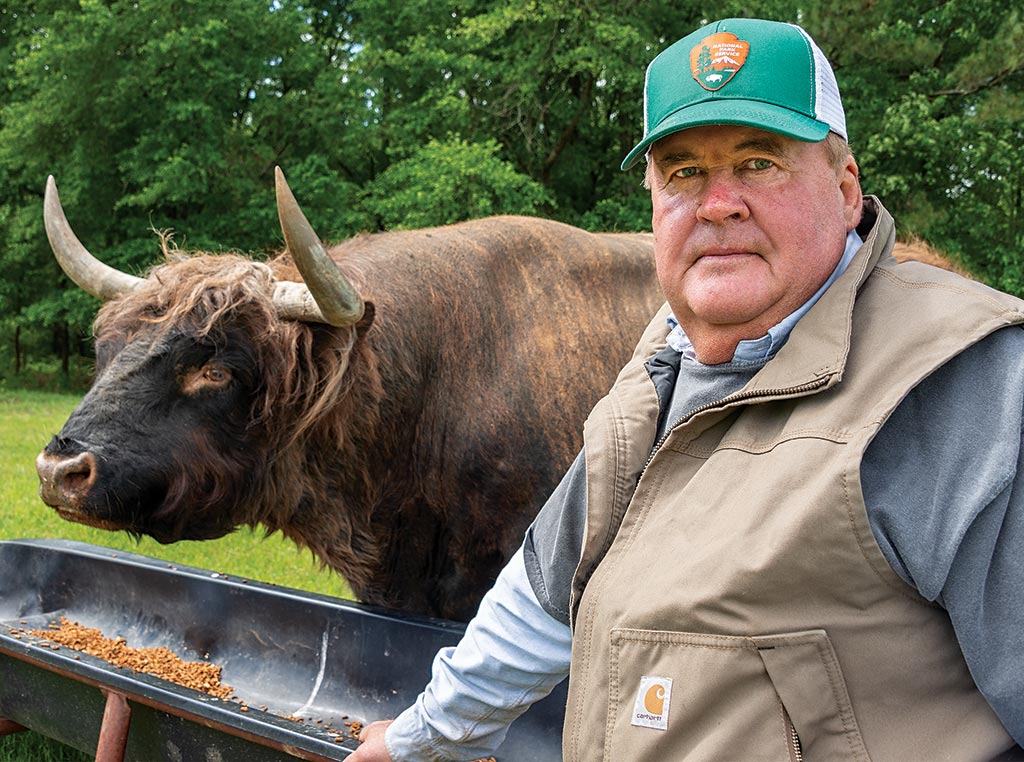 Farm from scratch? Time to shake things up.