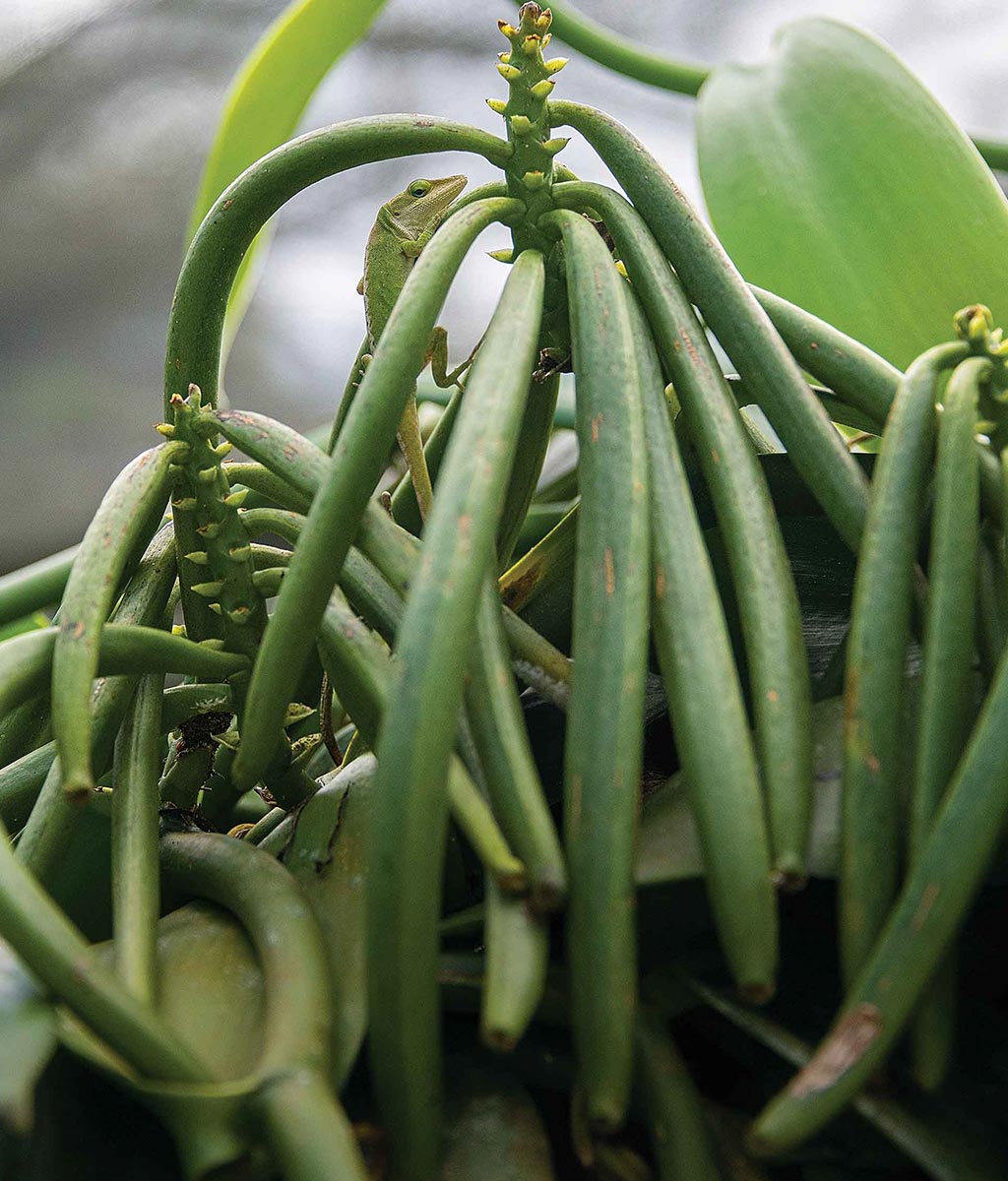 Vanilla grower nurtures a flavor of the tropics.

Vanilla beans are a delicious combination of slow food and quick response. The crop blooms over the course of three months, and in the absence of the Melipona bees that pollinate vanilla in the crop’s native Mexican jungle habitat, each blossom must be pollinated by hand. Harvest takes as long as bloom, spreading out across a quarter of the year. The beans sweat and cure for weeks, evolving from a harvest that looks like string beans into the richly scented, mahogany spice that is second in price only to saffron.

That’s the slow part. But vanilla growers have to act fast, too. Vines take off running, climbing like monkeys. And each ivory-colored vanilla orchid bloom is viable for just a day, so if the grower misses the chance to pollinate the flower, that fruiting position is gone.

For the past five years, Roland Barker and Lisa Parker have cultivated vanilla on the Hawaiian island of Kaua’i. The season starts in February with the first blooms. Barker and Parker wander among the dense vines flopped head-high over sturdy bamboo poles, watching for the creamy orchid flowers. They gently scratch the insides of the flower with a thorn, slicing a membrane that separates the stigma and anther. The male and female parts connect, completing a biological circuit and fertilizing the ovules that will yield countless tiny seeds nine months later.

Permaculture. The Vanillery of Kaua’i vines are part of a 2.3-acre permaculture planting that emulates natural plant communities to sustainably produce food.

A circle of banana palms fences in a compost heap, shading the pile to discourage germination and foster a complete breakdown of heaped plant matter. A barrier of comfrey keeps Kaua’i’s famous feral chickens from tearing up tender herbs. Citrus, mango, and avocado burst with fruit, while coffee and cacao grow in their shade. Native hou trees tower above a picket of sugar cane, a vestige of the island’s farm history.

The garden is tousled by the trade winds, but Barker and Parker’s love of sustainable homesteading was honed on the windswept coast of Scotland. There, the couple lived in Findhorn Community, an eco-village and spiritual education center renowned for its commitment to permaculture.

“That instilled in us this ethic of self-sufficiency, living close to nature—revering nature, really,” says Barker. “When you work with nature, you listen to nature, you let nature communicate with you. And whether that’s mystical or scientific, it’s still the same process—you’re paying attention.”

In 2004, Barker and Parker planted cuttings from a vanilla vine Roland’s grandmother let grow wild in the 1970s. They placed them around the homestead—in the sun, in the shade—and watched where they grew best. They listened to nature.

One of their first vines proudly dominates a lychee tree outside the couple’s bungalow, forming a thick net over the tree trunk like the veins on a weightlifter’s arms. The couple practiced pollinating the flowers on that vine, reaching as high as they could to stimulate fruit set and harvest the beans.

Growing vanilla in Hawaii is different than in the major production areas of Madagascar, Mexico, or South America. Barker found insight in an out-of-print book and built on it with online discussions and trial and error.

Eventually, he and Parker planted dozens of vines on T-shaped trellises made of home-grown bamboo. Ground cloth suppresses weeds and a tent of shade cloth hints at the jungle undergrowth where vanilla orchids thrive.

Above. One of the first Vanillery of Kaua’i vines snakes up a lychee tree. Roland Barker is an entrepreneur, musician, and vanilla grower. Hibiscus is a colorful foreground in a permaculture planting that also includes papayas, bananas, and more. Vanillery of Kaua’i products are consumed largely on the island, but the company also ships to the mainland via its website sales. Barker and Parker built a vanilla drying rack on the roof of their house.

Blossomed. Vanilla has blossomed into a good business for Barker and Parker. About 75% of their business is on the island, with Kaua’i chefs, small food businesses (including their own Tiny Isle line of macadamia nut butters), and neighbors seeking beans and extract to give their dishes a truly local flavor.

Most of the rest goes to the mainland through the farm’s website, vanillery.com.

Opening their doors to visitors with farm tours put the Vanillery of Kaua’i on the tourist map—literally. Guidebooks and state visitor resources introduced them to an eager customer base.

“Without buying advertising or anything, we’ve actually kind of floated to the top of these very short lists of things you can do, so we’re doing anywhere from 4 to 12 tours a month,” says Barker. “I don’t want to do more than that because tours are time consuming. I want to produce vanilla, and I have other businesses to run. But agritourism is an important part of our business now because of the retail sales channel that it represents. People, when they come on the tour, really want to buy stuff, they want to buy for their friends, so it’s ended up being a pretty good sales channel.”

Cooperation. Barker sees vanilla as more than a sales channel for himself and Parker. Just as communities of plants thrive together in permaculture, Barker envisions a robust, vanilla-scented local economy.

“Vanilla should be grown by smallholders,” Barker points out. “It’s relatively easy to take care of. It’s a good cash crop. You can do it on a very small scale and it still makes sense financially.

“One of the things I want to do is support the model of being the person who does the curing, so I would be buying green beans from growers and completing the process with curing,” he explains. “That’s a common model in vanilla growing areas around the world.

Go vertical to put fun back in gardening. 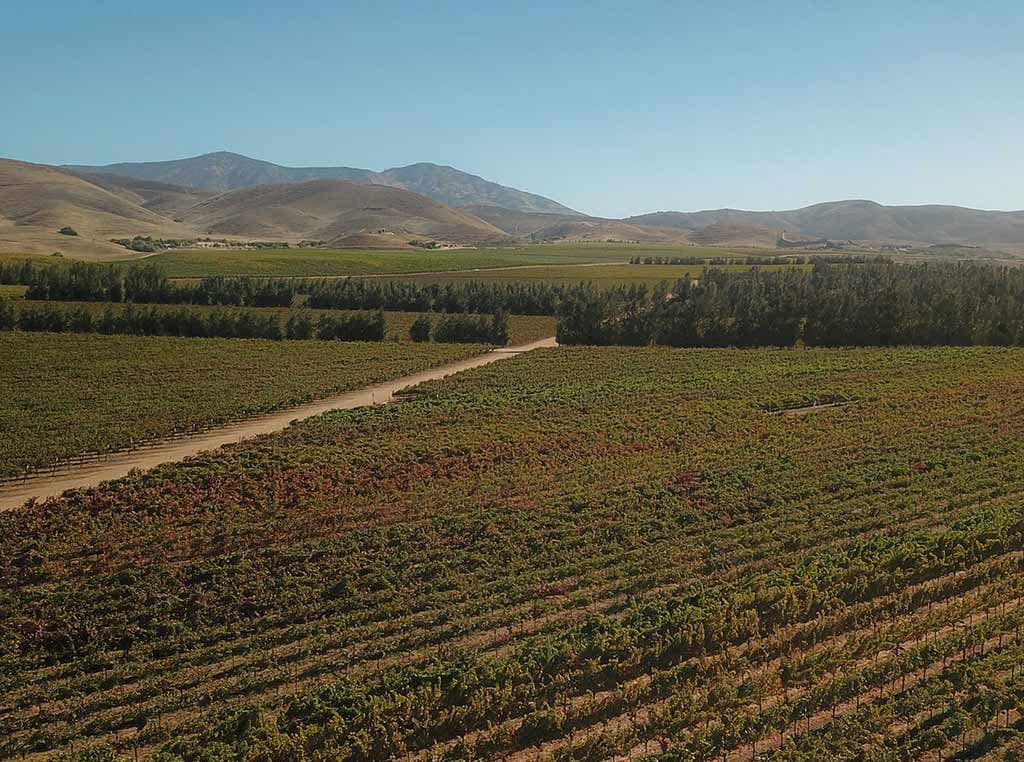 Native yeasts are the ultimate expression of terroir.