Expand All Collapse All

John Deere rotary harvesting units are built for reliable and powerful feeding of high-capacity forage harvesters. Two fundamental designs are available to match all producer needs. The 600plus Series Headers are the universal solution for different crops up to 4-m (13.1-ft) tall. The 700plus Series Headers are the perfect solution for high-yielding crops. 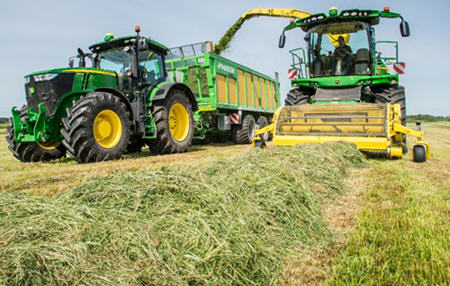 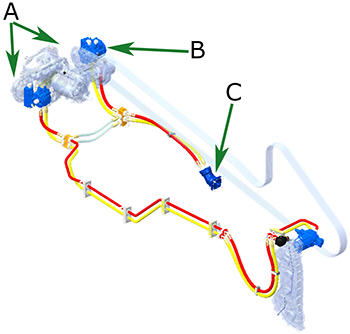 John Deere SPFH come with variable header drive in base. The header speed is automatically synchronized with the feeding speed and length of chop through a hydrostatic IVT™ drive system. This ensures a gentle and even crop transfer from the header into the machine without blocking or disrupting material transition. Producers receive the benefit of high chopping quality and full leverage of the header and crop flow potential. 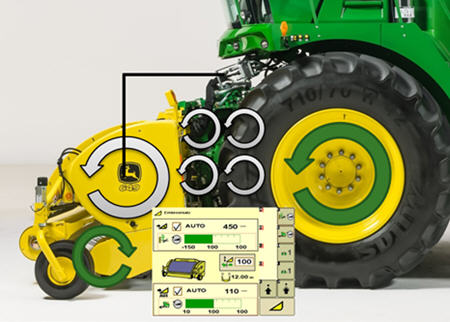 Speed synchronization between the SPFH and header

Tines speed up and slow down with forward speed while the pickup auger speed is still synchronized with the length of chop and feedroll speed. Producers benefit from a better quality of chop, smoother feeding, and an easy-to-utilize harvesting system.

The 9000 Series SPFH offer the hydraulic feedroll dampener in base. Next to the four individual springs applying high pressure on the crop mat entering the machine, the dampener supports crop compaction in uneven crop conditions and ensures smooth feeding even at the highest feeding speeds when chopping for a very long period. 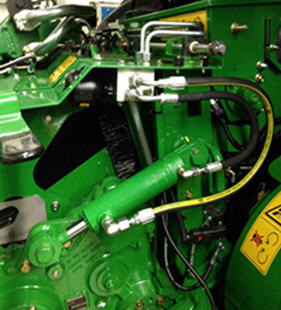 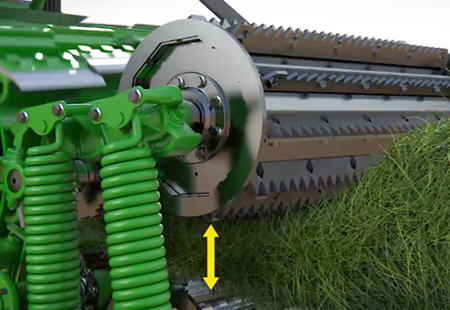 Crop compaction and even feeding at the feedroll

A state-of-the-art metal detector scans for metal in the crop mat and stops the intake in case of tripping. Optionally, this safety device can be completed with a unique stone detection feature that senses for knocks and abnormal feedroll movement. Two redundant sensors developed for this application improve solid foreign object detection and minimize false tripping caused by lumps or uneven windrows.

The John Deere 9000 Series Self-Propelled Forage Harvesters (SPFH) have been developed with a clear focus on machine performance: more throughput and less fuel consumption while providing maximum uptime and low cost of operation.

A key success factor is the concept of lower engine rpm at higher harvesting component speeds.

The top-model 9700, 9800, and 9900 SPFH are equipped with a Liebherr 12-cylinder V-engine with 24-L displacement. The Liebherr D9512 is a state-of-the-art engine and delivers what a high-performance forage harvester requires: 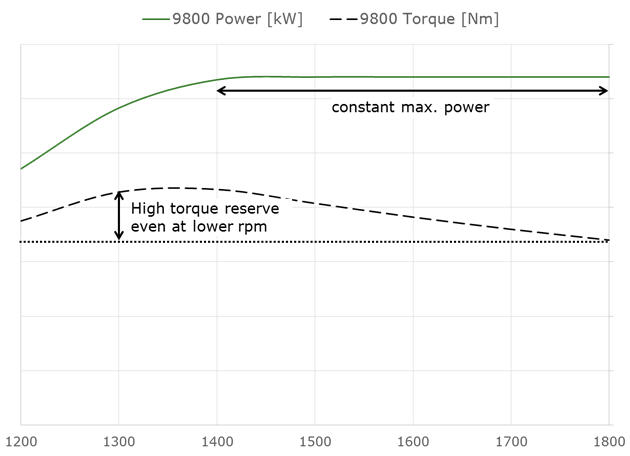 Torque and power of the Liebherr engine

The broad maximum power range of the Liebherr V12 engine cuts off the less-efficient rpm area above 1800 rpm. The rising torque curve down to 1300 rpm enables efficient operation of the machine in the lower rpm range.

To reach maximum efficiency and performance, all machine component speeds are re-worked and laid out for best function in the 1400 to 1800 engine rpm range. This also leads to better fuel efficiency with an optimum range from 1250 to 1600 rpm, where the engine has its lowest specific fuel consumption (g/kWh). 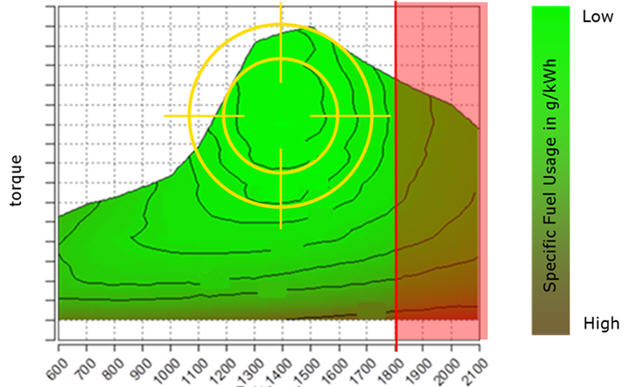 Liebherr is a trademark of Liebherr-International AG. 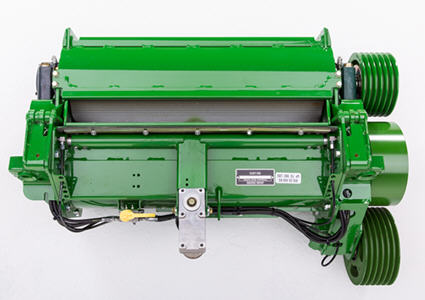 On the 9000 Series, the proven John Deere Premium KP can be installed on the 9500 through 9800 models. With their highly intense processing, they deliver excellent forage quality at any length of cut.

The main features of the Premium KP are:

The following rolls are available for the Premium KP:

With the option of Dura Line rolls, a longer lifetime and less wear can be reached, resulting in lower cost of operation. 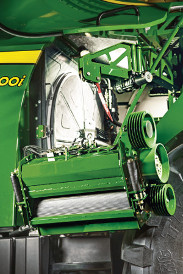 The following additional options are also available for the Premium KP. 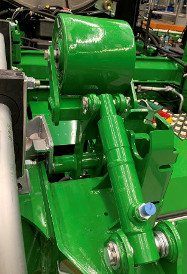 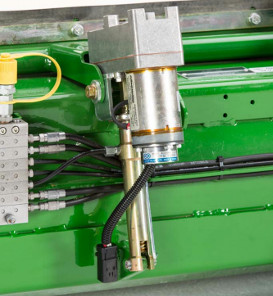 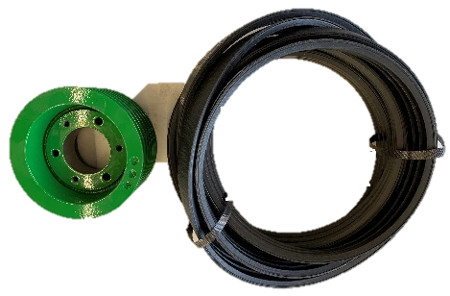 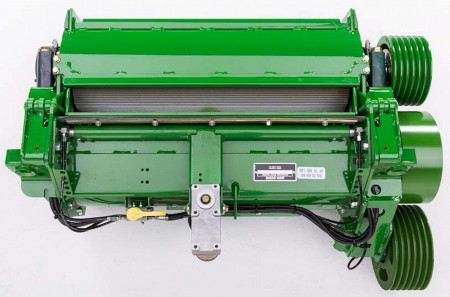 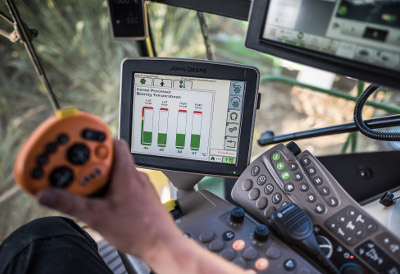 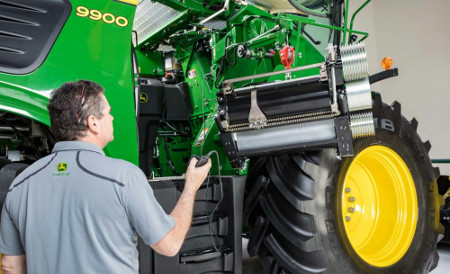 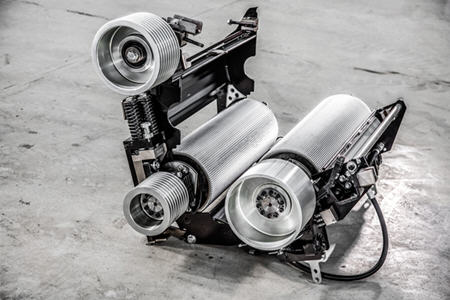 The John Deere XStream KP is the heavy-duty solution made for high throughput and high-horsepower machines and stands for extreme processing at any length of cut in any crop and any conditions.

The XStream KP rolls are manufactured and delivered by Scherer Inc., located in South Dakota, United States. The kernel processor is supplied ex-factory by Scherer Inc. and fits on all 9000 Series models. As Scherer Inc. has a strong focus on dairy forage production and is the leading company in KP roll designs and manufacturing since 1999, a strong statement is set regarding kernel processing and forage quality.

More information about Scherer Inc. can be found on their website: http://www.schererinc.com/

The main features of the XStream KP are:

The following rolls are available for the XStream KP:

The following additional options are also available for the XStream KP.

Due to increased machine usage (chopping more tons per hour), standard high-quality steel parts need to be replaced more frequently. Since 2010, John Deere has been meeting the challenge and exceeding expectations with Dura Line wear parts.

Dura Line components  were developed by John Deere and are installed in high wear spots on the self-propelled forage harvesters (SPFH), mainly in the crop flow. The technology is normally used for heavy-duty environments such as mining and machine tooling. It is the highest material quality in the industry that is installed on an SPFH. 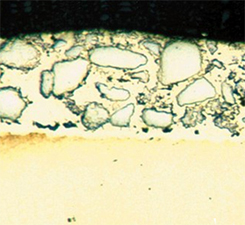 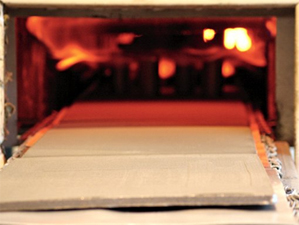 For more information about the Dura Line guarantee, contact the local sales organization.

The John Deere Dura Line crop flow liners come in three packages. Depending on the individual harvesting requirements, there is a perfect package for every need. 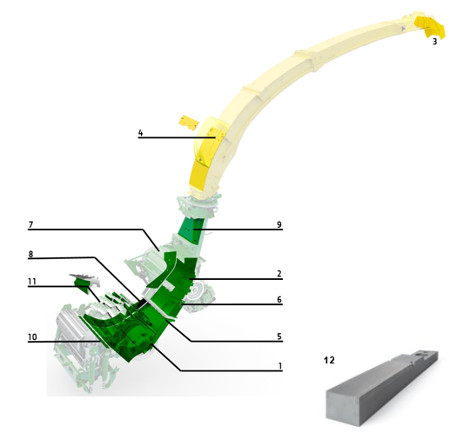 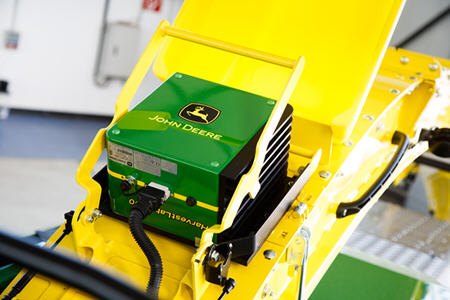 HarvestLab 3000 measures dry matter and constituents on the go 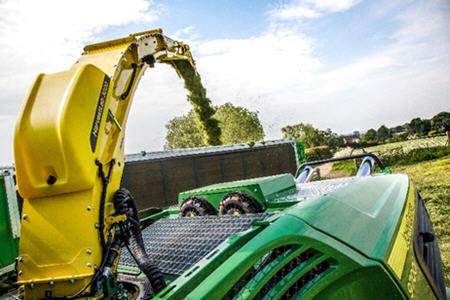 HarvestLab 3000 sensor mounted on the spout

The HarvestLab 3000 sensor mounts to the top of the discharge spout and takes accurate dry matter and ingredient readings (more than 4000 measurements per second) of the crop through the sapphire glass lens as crop passes through the spout. This is the same technology forage labs use to measure dry matter. HarvestLab 3000 with John Deere Constituent Sensing measures dry matter and constituents like sugar, starch, acid detergent fiber (ADF), neutral detergent fiber (NDF), crude fiber, crude ash, crude protein, crude fat, Metabolic Energy and ELOS depending on the crop. In addition, the HarvestLab 3000 sensor can also be used as a stationary unit. 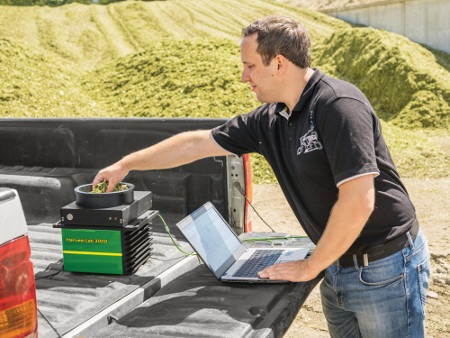 When HarvestLab 3000 is used in conjunction with Harvest Monitor™ system, a wealth of important information becomes available to the operator, including productivity in acres per hour, throughput in tons per hour, total area harvested, total crop mass harvested, yields, and dry matter. To measure and document the constituents, a Gen 4 4640 Universal Display is required. All data documented on the Gen 4 4640 Universal Display is shown in John Deere Operations Center. 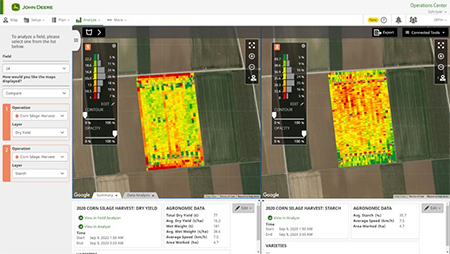 When the HarvestLab 3000 is used in conjunction with an 8000 or 9000 Series Self-Propelled Forage Harvester (SPFH) and a GreenStar™ display, AutoLoc functionality is automatically present. AutoLoc automatically varies the length of cut according to the desired crop-dry matter correlation settings based on the dry matter readings from the HarvestLab 3000 sensor. With the AutoLoc adjustment, bunk density is improved and a high forage quality is reached.

It impacts the silage compaction in the bunker to ensure the quality of feed being stored is the best quality possible.

Good silage starts with high bunk density to preserve the crop value. This is the main objective for both dairy/beef producers and biogas plants. Many factors are involved in achieving high bunk density, including type of crop, moisture levels, length of cut, bunk filling speed, and compaction machinery.

Some of these factors cannot be easily changed while harvesting. AutoLoc adds an improved sense of control to the harvesting and silage storage operation. Operators do not need to compromise when choosing the proper length of cut based on moisture. AutoLoc takes care of this chore automatically.

Oftentimes, producers are so focused on getting the job done that important tasks and details are overlooked during the harvesting operation. Knowing the growing period for corn silage covers five months growing in the field and only a few days harvesting for 10 to 12 months of feeding, the process of the silage harvest and storage should be managed as well as possible.

The impact of the silage quality, which can be harvested and stored in just a few days, can have a huge impact on income throughout the entire year. The silage cost is a major part of the expenses in the dairy/beef and biogas plant businesses. Poor forage quality can cost tens of thousands of dollars per year in increased feed costs resulting in the producer having to invest in additional silage to reach the desired feed ration.

Spoilage/reheating and seeping losses are the biggest problems in silage bunks. These problems often happen due to insufficient compaction and an incorrect LOC. To achieve the right amount of silage compaction and keep as much air out of the silage as possible, the LOC has to be adjusted according to the moisture levels of the crop - the wetter the material, the bigger the particle size.

While varying lengths of cut can dramatically help to achieve high density levels, the length of cut of the material must be consistent in order to maintain normal rumination, chewing, and saliva production in the rumen. If the particles are too small, the food does not fit anymore with the process of the cow rumen and the compaction becomes difficult due to the instability of the material.

For this reason, John Deere created AutoLoc, which automatically adjusts the length of cut to the moisture value, while staying within the preset LOC range.

Looking at the studies done by Honig and Rohr in 1985, as can be seen in the following table, it is possible to get high-density levels of dryer crop when the crop is chopped at a shorter LOC. 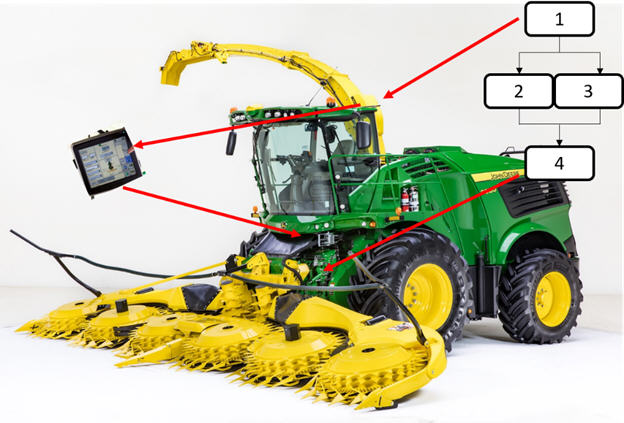 AutoLoc, a feature exclusive to John Deere and unique to the market, brings added value to the HarvestLab sensor and John Deere SPFH. AutoLoc works in conjunction with the HarvestLab 3000 sensor and IVLOC transmission to automatically adjust the length of cut (LOC) based on crop moisture levels to improve bunk density and reduce long particles in dry corn. Nutritionists, herdsmen, and SPFH operators will all benefit from this innovation.

John Deere is leading the industry in providing real-time information that matters most to forage production. Quality forage comes from properly packed silage, which is directly related to the moisture content and LOC of the crop.

LOC changes are made automatically in the field based on moisture readings and predetermined settings determined by operator requirements. No in-field calibration is required to load the LOC requirements; the operator simply uses the GreenStar™ display to program the desired LOC settings at different moisture levels. 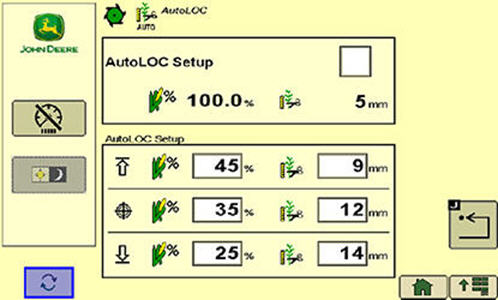 According to the accurate moisture readings, AutoLoc is able to adjust the proper LOC automatically in steps as small as 1 mm (0.04 in.). This process is faster and more accurate than any operator could do manually because of all the other important operating functions being performed. This can increase overall efficiency dramatically. 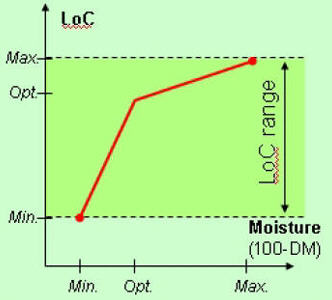 The following equipment is required for AutoLoc functionality:

180-Day No Payments No Interest†

†For complete details regarding this offer, please select the corresponding link above.

†For complete details regarding this offer, please select the corresponding link below.